‘When I met the late lamented Irving Chernev in San Francisco in 1976, he told me that he and Fred Reinfeld ghosted most of the important American chess books which, between 1930 and 1950, appeared as the works of other authors (apart from those which appeared over their own names, i.e. the majority!), including Marshall’s Best Games. (Marshall, according to Chernev, was incapable of writing a coherent page, at least by the 1930s.) Can anyone identify any other important chess “ghosts”?’

Sidney Bernstein informed us on 25 September 1986:

‘I was a close friend of Reinfeld – and, for what it’s worth, he confided to me that he had indeed written the Reshevsky book [Reshevsky on Chess]. (He was, as you may well have surmised, a prolific ghost-writer – and “did” other books by great players, including Frank Marshall.) Marshall, incidentally, was a delightful, lovable gentleman as well as a chess genius.’

‘I have been told he did not in fact write the book but that it was written for him. In any case one must assume that even if he did not actually write the work he told someone else what to write.

It is odd how this tradition of deputing other people to write one’s books seems to have flourished in America since Marshall was followed in this practice by two of the most outstanding of his successors as United States champion, Sammy Reshevsky and Bobby Fischer. It is also a little odd if indeed Marshall did descend to this practice since I gained the strong impression when I met him that he was one of the most honest and sincere of all grandmasters.’

After a run of finely-researched books, McFarland & Company, Inc. has produced something unworthy: Fred Reinfeld. The Man Who Taught America Chess, with 282 Games by Alex Dunne (Jefferson, 2019).

One passage for now, from pages 131-132 of this casual, undiscerning 194-page paperback: On page 165 Dunne stated outright that the Marshall book was ‘ghostwritten’.


From Lodewijk Prins (Heemstede, the Netherlands), who responds to an enquiry from us regarding the background to some of Euwe’s books:

Before the War, none of us was mentioned, but after 1945 I chose to act as incidental co-author or to contribute to his publications under my own name (the Capablanca memorial book and Amsterdam, 1950; for the Capablanca book I did most of the work, including literary and analytical research). Others followed in my track (Mühring, Kramer, van der Sterren), and the latter two are even now active in preparing revised editions.

The ghost-writing in question was an open secret and, of course, Euwe was behind the concepts and bore full responsibility for the final result.’


David Bronstein’s book on the Candidates’ tournament in 1953 is regarded as a classic, and it is therefore of interest to note his comments in an interview with Antonio Gude on pages 38-42 of the March 1993 issue of the Revista Internacional de Ajedrez. Bronstein declared:

‘Most of the nice words and elegant expressions in the book overall are the work of Vainstein, who writes very well ... Of course, the analysis and technical concepts are mine, as are the views on my rivals, but it may be said that a large part of the text is by Vainstein. Also, it is a book for which I do not have particular affection because it reminds me of a tournament that was very special in a negative sense. Things happened there that I should like to forget ... We shall discuss that another time. I do not wish to be more specific for the moment.’

a) John C. Rather, who was on the staff of Chess Review at the time that journal published the book, reported in C.N. 445:

‘Reinfeld selected the games and annotated them; I wrote the foreword; and Alfred Sheinwold (the bridge writer) and I prepared the introductory text throughout the book (the soi disant autobiography). In short, beyond sanctioning the project, Sammy had little to do with it.’

b) In early 1985, Hugh Myers received the following note from Reshevsky:

‘... it is written that the book Reshevsky on Chess was written by someone else. False! Every word in that book was written by me! I think you ought to correct that. Thanks, S. Reshevsky.’

‘Several years ago Reinfeld was preparing a book of Reshevsky’s games, and he asked me to contribute an introductory article. Why he asked me, of all people, I can't say, but anyhow I wrote the article ...’

No book of Reshevsky’s games was published under Reinfeld’s name, and Reshevsky on Chess contains no article by Fine.

d) Page 256 of the August 1950 Chess Review contained a critique of Reshevsky on Chess by Fred Reinfeld himself:

‘The notes are especially fine and illuminate many valuable points that were ignored or misunderstood by earlier annotators. Playing over these games with Reshevsky’s superb notes makes one feel that one is seeing them for the first time – seeing them as Reshevsky saw them when he played them. Hence the title.’

e) Page 121 of the March 1952 CHESS quoted a fulminatory letter from Reinfeld to E.G.R. Cordingley:

‘Although you have consistently maligned my work, you praised the “Reshevsky” annotations to the skies; would you have done so if you had known that I wrote those annotations?’

The CHESS editor commented: ‘In his fury, Fred Reinfeld has rather let the cat out of the bag.’

‘Finally, this book was not ghostwritten. It is necessary to say this because many books on chess, and on other subjects for that matter, have capitalized on the names of prominent people who had little or nothing to do with writing the books. It has been my privilege to assist Mr Reshevsky in the production of this volume, arranging the games into chapters, checking the descriptive notation, typing the manuscript, etc., but Mr Reshevsky is the original and only author of this book.’

The work’s clipped, artless prose style, so typical of Reshevsky, certainly backs this up. Here, for instance, is a paragraph from page 31:

‘Ståhlberg, the Swedish veteran, is an extremely tough opponent. His strength lies in his stubborn defense. He does not take any unnecessary chances. His objective is to draw. His style is similar to that of Eliskases. Both are difficult to defeat.’

The full text relating to the above-mentioned letter from Reinfeld to Cordingley, published on page 121 of CHESS, March 1952 under the headline ‘Explosion!’:

‘E.G.R. Cordingley has allowed disparagement of others to become almost an obsession. A recent article of his sneered, in the course of a few paragraphs, at “the flaccid and superficial reviews appearing in other magazines”, their critics’ “small knowledge of the polyglot literature of the game” and “easy acceptance of a mediocre standard”, went on to mention the “ignorance” of chess publishers and accused magazines of dishonest reviewing so as not to harm sales.

All this was introductory to quoting a letter from Fred Reinfeld to him as follows, which shows how such a critic can get under an author’s skin:

“Dear Sir: ... For years, as I have been reading your boorish, spiteful and peevish slanders of my work, I have wondered where you acquired the right to pontificate in this Draconian manner. Is it from your masterly showing in the Surrey Championship; from your trashy little volume which is the only one you ever succeeded in getting published; is it from the scrawny magazine and tournament ‘books’ cluttered up with misprints and illegible spots?

Although you have consistently maligned my work, you praised the ‘Reshevsky’ annotations to the skies; would you have done so if you had known that I wrote those annotations?

Please do not bother to communicate with me, for reasons of explanations or otherwise. I am thoroughly disgusted with being the subject of the ravings of an ignoramus. – Fred Reinfeld.”

In his fury, Fred Reinfeld has rather let the cat out of the bag. Certainly Cordingley’s review of Reshevsky on Chess was exceptionally fulsome for him.’ ‘Reshevsky on Chess: ... Reshevsky’s masterly notes give the reader an unequaled insight into the workings of a master’s mind during actual play.’

Regarding the above reference to Reinfeld and Cordingley, see too C.N. 9686.

As reported in C.N. 9833, in a letter dated 23 July 1988 we asked Reshevsky about published suggestions that books of his had been ghostwritten, and he replied by postcard on 29 July 1988:

Is anything known about the provenance of Reshevsky Teaches Chess (New York, 1973/74)? A mundane, impersonal treatise for beginners, it ends by flitting through some of the old usuals: Our copies of the hardback and paperback editions were inscribed by Reshevsky. The latter volume: 
As mentioned in our Copying feature article, postings at the Chess Café’s Bulletin Board in 2001 (most notably by Paul Kollar) pointed out many passages published under Larry Evans’ name which were identical or similar to what had appeared in books by Lasker, Réti, Reinfeld and Fine. Regarding Fine, on page 32 of the February 2002 Chess Life Evans defended himself by affirming that he had collaborated on The World’s Great Chess Games and had himself written the passages in question. In C.N. 488 a correspondent asked whether the book The World Chess Championship A History by Al Horowitz (New York, 1973) was ghosted, and the matter remains unresolved.

Horowitz died on 18 January 1973, and it seems that the book, published by Macmillan, appeared that summer (see, for instance, page 452 of the August 1973 Chess Life & Review). In the United Kingdom, B.T. Batsford Ltd. brought it out the same year under the title From Morphy to Fischer, and in a review on pages 158-159 of the May 1974 BCM W.H. Cozens remarked:

‘The one serious typographical blemish is the irregularity of impression – the sporadic occurrence of pale patches which make some pages look like proof sheets.’

Cozens did not mention that the pale patches resulted from textual corrections in the Batsford edition. For example, on page 18 ‘John Blackburne’ was corrected to ‘Joseph Blackburne’ and on page 24 ‘Harry Bird’ became ‘Henry Bird’. On the other hand, ‘E.G.’ (instead of P.W.) Sergeant and ‘Samuel’ (rather than Leopold) Hoffer appeared in both editions (see pages 6 and 39 respectively). Whether those factual errors are evidence that Horowitz was, or was not, the author is debatable, but W.H. Cozens was certainly right to observe about the volume, ‘This is not the rumbustious Horowitz of such books as “How to win in the Chess Openings”.’

Trevor Moore (Baughurst, England) points out a number of errors in Al Horowitz’s book on the world chess championship, including the following:

Fischer was born in 1943, and page 202 is therefore accurate in saying that at the 1962 Interzonal tournament in Stockholm he was aged 18.

Whether this contradictory information is evidence that the Horowitz book had more than one author is an open question.

The exact genesis of the 789-page volume Chess Openings Theory and Practice by I.A. Horowitz (New York, 1964) is a topic raised by a correspondent in C.N. 10378. What facts are available regarding this suggestion that Emanuel Lasker’s column in the New York Evening Post may have been ghosted?

From the dust-jacket of a book which he co-authored with William Lombardy, Chess Panorama (Radnor, 1975): 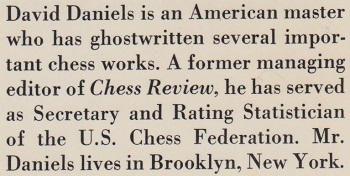