Black to play and gamble:

Few chessplayers today seem to know much about W.H.K. Pollock (1859-1896), yet in his time he was celebrated for his spectacular combinations and original style of play. He seldom came first in events, an exception being the Belfast, 1886 tournament, which he won with a clean score of 8/8, ahead of Blackburne and Burn. On the other hand, many of his individual games received high plaudits from the most demanding critics, as is shown by a brief compilation of comments by the then world champion, Steinitz:

A posthumous distinction for Pollock was being one of the very few players to be the subject of a biographical games collection in the nineteenth century. In 1899 Mrs F.F. Rowland of Kingstown, Ireland brought out Pollock Memories: A collection of Chess Games, Problems, etc. etc.

A copy lies open before us now, inscribed by her in 1903, and from it we cull some specimens of Pollock’s ingenious play. The focus here is on brilliancies, many from offhand games, which are seldom seen nowadays.

First, an attacking game peculiar in that, until the end, no white piece goes beyond the third rank:

The configuration of a black bishop on e4, black rook on g2 and white king on h1 also arose in the game P. Rynd v W.H.K. Pollock, Nottingham tournament, 1886:

If 33 Qxd3 Black wins with 33…Rh2. Even so, the conclusion is strange, and an inaccuracy in the final part of the game-score cannot be ruled out.

An insidious trap comes next. No sooner has Black fallen into it than he is exposed to a fierce and unexpected attack:

The following game is an excellent illustration of pins.

At move 20 in the game below, Steinitz referred to the continuation as an ‘intellectual treat’.

Pollock defeated Steinitz in their only individual encounter (Hastings, 1895), a game which the victor annotated on pages 396-397 of the September 1895 BCM. Apart from their intrinsic interest, the notes are significant for being the source of Pollock’s most famous quote, ‘It is no easy matter to reply correctly to Lasker’s bad moves.’

It is instructive to compare the above notes with those by Pillsbury in the Hastings, 1895 tournament book (edited by Horace F. Cheshire) and, for a modern view, with the annotations of Colin Crouch in the 1995 monograph on the tournament which he co-wrote with Kean Haines. Pillsbury’s final note read, ‘Rather an amusing finish to a very interesting game’.

Who, then, was this man who gathered many scalps yet seemed primarily concerned with playing exquisite chess and regularly switched to what today would be called ‘hacking mode’? William Henry Krause Pollock was born in Cheltenham, England on 21 February 1859, the son of the Rev. William J. Pollock, and was educated at Clifton College and Somersetshire College, Bath. He studied for the medical profession and in 1882 qualified as a licentiate of the Royal College of Surgeons in Dublin. The same year his first published game and problem appeared in the unlikely setting of the Irish publication The Practical Farmer. As his chess strength developed he became a regular participant in British tournaments, attracting more attention for individual games than for his final standing. In 1889 he went to North America, settling in Baltimore, Maryland. He returned to England in 1895, and the October issue of that year’s BCM (page 414) described him as ‘a tallish good-looking fellow, courteous and pleasant, with poetic fancies both in chess and words, and who sits far back with arms resting on his knees and face almost touching the board, so that it seemed hardly possible for him to view the whole’. He was indeed an accomplished writer, although he left only one book, on the St Petersburg, 1895-96 tournament, jointly written with James Mason.

By then his health was already in grave decline, and as the obituary in the November 1896 BCM (pages 441-446) was later to report, ‘his friends were, however, much pained with his altered appearance, for signs were evident that the fell disease consumption was sapping his constitution’. Despite their appeals, he travelled to Montreal in early 1896, but stayed in North America for only a few months. In his final column for the Baltimore News, dated 8 August 1896, he bade farewell:

‘With very great regret, I have to announce that I am obliged to abdicate the chair of chess editor of this column. Serious and prolonged trouble of (at least) a bronchial nature has compelled my severance from my many delightful chess associations in this country, and I am due to sail for my paternal home in Bristol on this day, if perchance complete rest and home treatment may effect a restoration.’

Never was his career better summarized than in the BCM obituary:

‘In the early days of Mr Pollock’s chess career, many people thought that in him a future English champion would be forthcoming, and the glories of Staunton and Blackburne be revived if not eclipsed. But this expectation was not fulfilled, and Pollock’s chess career must be regarded as a fragment rather than a whole. Yet it is a fragment no British lover of chess would willingly part with, for it is full of beautiful promise and adorned with many chess gems of rare brilliancy. With great gifts for the game he never attained the highest rank among the Masters, though it may be doubted whether any one of them excelled him in actual and potential genius for the game. In chess, however, he was an idealist. He worshipped at the shrine of the beautiful. He was not content to do what he could do easily and well, but strove after the absolute – his own perception of the perfect. He was above all an artist at the chessboard. It was not merely “the mate” that he pursued, but the beauty of the mate; he did not merely want to win, he always wanted to win in the most artistic manner. And in this pursuit of the ideal, the practical often suffered. Had he been more self-seeking, the chess world would have heard more of him personally. Neither nature nor art had fitted him to be his own trumpeter; he loved chess for its own sake, and not for the gain it might bring him, or the reputation he might attain by its means.’

As a concluding bonne bouche, there follows a very difficult problem composed by Pollock:

The position is illegal but provides a stiff challenge. Mrs Rowland’s book (page 158) reported that ‘this very peculiar and highly original problem was composed by Mr Pollock on the occasion of giving a lesson on the art of composing at the Baltimore Chess Association’.


Afterword: The above article first appeared at the Chess Café in 1998 and was included in A Chess Omnibus (pages 227-233). In the latter source we mentioned that Pollock Memories was reprinted by Moravian Chess, circa 2001. The reverse is inscribed by Babson to James D. Séguin: 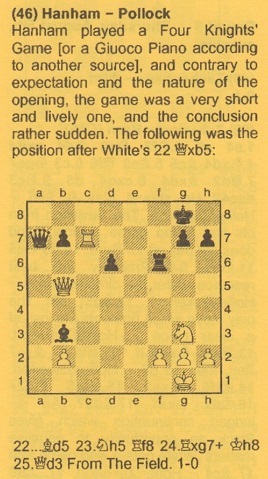 Since ‘The Field’ and ‘another source’ are the sole information offered, and there is no mention of the straightforward mate in four (22...Qxf2+), further details will be appreciated.

We commented in C.N. 8901 that, in addition to the inadequate sourcing, no mention was made of a straightforward mate in four (22...Qxf2+).

The reason can now be given: the queens’ colours were inverted. The full score was published on page 53 of the Irish Chess Chronicle, 1 August 1887: 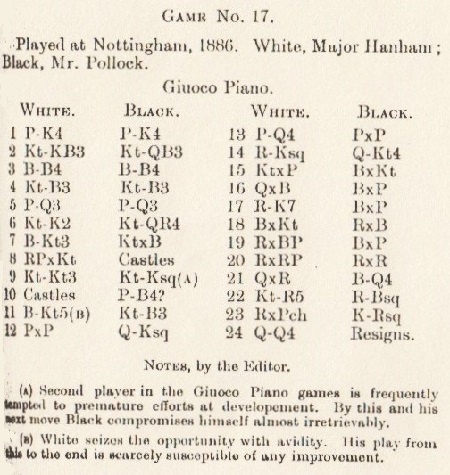 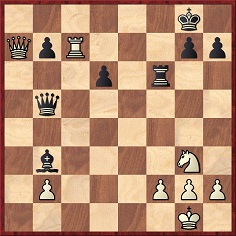 Page 5 of Chess Quotations from the Masters by H. Hunvald (Mount Vernon, 1972) gave Pollock’s above-mentioned observation ‘It is no easy matter to reply correctly to Lasker’s bad moves’ but labelled the source as ‘Anonymous’. On page 466 the co-authors quote this passage, praising it as ‘perhaps best summing up Pollock’s finest traits as a chess player’.

A portrait from opposite page 46 of the Hastings, 1895 tournament book: The Pollock book is one of the finest in the entire McFarland catalogue.

‘On the topic of similar photographs (C.N.s 5372, 5405, 6709, 7429 and 7724), page 193 of the recent Pollock biography reproduces a picture of him from page 138 of Sportfolio: Portraits and Biographies of Heroes and Heroines of Sport and Pastime (London, 1896). Our caption states that the photograph, by George Bradshaw, is also featured in the Hastings, 1895 tournament book edited by Horace F. Cheshire. In fact, the Pollock portrait given opposite page 46 of the latter work (shown in C.N. 10457) is slightly, almost imperceptibly, different, although undoubtedly taken on the same occasion: Our book also has photographs of Chigorin (page 58) and Tarrasch (page 185) taken during the Hastings, 1895 tournament by William James Donald. They are different from the Bradshaw photographs opposite pages 121 and 60 respectively of Cheshire’s book. On the other hand, Donald’s photographs of Steinitz and Pillsbury in the Pollock volume (pages 181 and 189) are identical to the Bradshaw photographs in the tournament book. Can further versions of such 1895 photographs involving the Hastings participants be found?’