The March 1890 BCM (page 100) reported that ‘the following pretty ending occurred in a game recently played at the Vienna Club’.

White (Neumann) defeated an unnamed opponent with 1 Qe4 Qxg5+ 2 Kc6 ‘and Black cannot save mate. Had Black made any other move than taking the pawn, it will be seen that White equally wins.’

Michael Sharpe (Calgary, Canada) points out that this (rotated) position is also given on page 103 of The Tactics of End-Games by Jenő Bán (‘A. Neumann, 1887’) and page 144 of volume three of Lehr- und Handbuch der Endspiele by André Chéron (‘from a game by Neumann, 1887’).

The most detailed analysis we have found is on pages 75-76 of Johann Berger’s Theorie und Praxis der Endspiele, which acknowledges the Austrian journal as its source. P.W. Sergeant, in turn, credited Berger when using the position on pages 98-99 of An Introduction to the Endgame at Chess.

No players are named, yet it is a mirror reflection of a position that arose in a game in the British Ladies’ Championship at Brighton in 1938 between Miss R.M. Dew and Mrs F.F. Thomson:

‘A game in the Women’s Championship came down to the diagrammed position at adjournment-time and Mrs Thomson sealed the move ...Qc5+. Some bystanders audibly criticized Mrs Thomson for trying to win an obviously drawn game, so she changed her mind and accepted the draw. Subsequently, analysis revealed a forced win by Ka6 Qa3+; Kb7 Qb4+; Ka6 Qa4+; Kb7 Qb5+; Ka7 Kc7! and mates. Luckily this did not affect Mrs Thomson’s final position.’

An identical version of this incident is given on page 418 of the September 1938 BCM.


As noted on page 50 of Chernev’s Wonders and Curiosities of Chess, N.M. MacLeod holds the unenviable record of the most games lost in a single tournament: 31 at New York, 1889.

He was, however, responsible for an extraordinary defeat of Emanuel Lasker in a simultaneous exhibition in Quebec in 1892. Extraordinary, because it must surely be the only game Lasker ever played in which he struggled on in vain when two queens down: 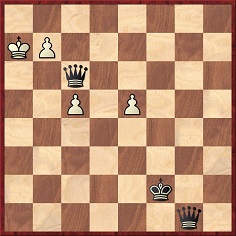 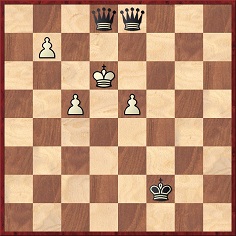 A potted biography of Nicholas Menelaus MacLeod which Jeremy Gaige sent us in 1983 was reproduced in C.N. 479 and is included in our feature article on Gaige.


Pages 77-80 of the Dresden, 1892 tournament book feature a remarkable game Albin-von Bardeleben in which six queens appear (not simultaneously). It is topped off with ‘a tragicomic final position’: 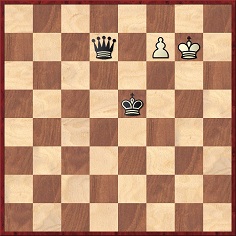 An endnote on page 257 of Chess Explorations:

C.N. 1217 noted that on page 8 of Chess: The Complete Self-Tutor Edward Lasker referred to a game with five queens ‘played in the international tournament of Karlsbad in 1911’, although ‘the fifth queen came off directly after promotion’. No such game is to be found in the tournament book, the closest being Burn-Chajes (four queens at one time, an exchange of one pair, and a fifth one later). As reported in C.N. 1395, N.I. Grekov mistakenly claimed that the Burn-Chajes game had ‘five queens on the board at the same time’ (CHESS, 14 October 1937, page 56).

Alekhine’s spurious five queens game against Grigoriev was featured in C.N.s 326 and 387. A comprehensive account of the game appeared in Chess Curiosities by T. Krabbé.


Robert Timmer (Hilversum, the Netherlands) quotes positions where each side has two queens only: 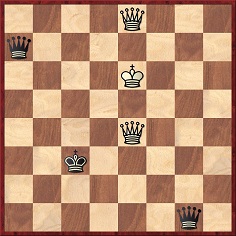 ii) A composition by Noam D. Elkies on page 58-59 of issue 2 of the American Chess Journal. In the summer of 1992 Lewis Stiller discovered a mutual Zugzwang position (White: king on h1 and queens on h2 and g2. Black: king on a1 and queens on a7 and f6) which Elkies used to create the following study: 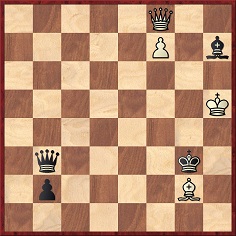 
An instructive ending (first pawns only, then queens only) which was presented on page 94 of the June 1899 Wiener Schachzeitung: 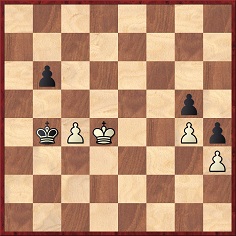 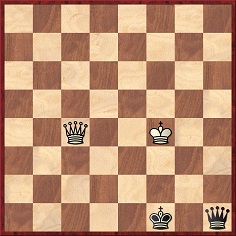 On page 19 of the January 1900 Wiener Schachzeitung Hamlisch pointed out that in the diagram above he could have drawn with 13…Kg1.


In the position below, from a game played in Berlin, Alfred Sormann (Black, to move) agreed to a draw. 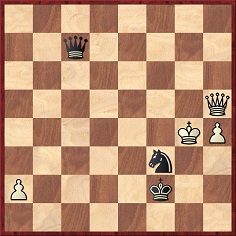 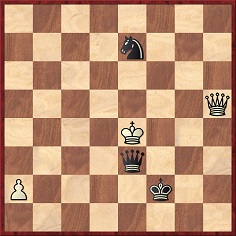 Source: Deutsches Wochenschach, 2 February 1908, page 45. The June 1908 issue of La Stratégie (page 191) erroneously presented this line as the actual conclusion to the game (also omitting the irrelevant pawn at a2), while the Study Database 2000 gives more or less the same position (with colours reversed) as being by Sormann (from an unknown 1908 source). 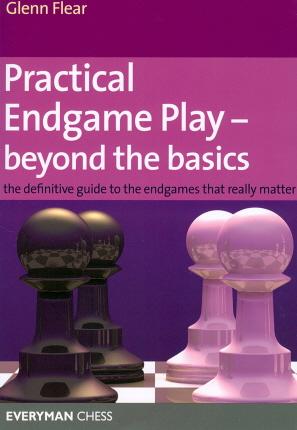 A particularly interesting chapter in Practical Endgame Play – beyond the basics by Glenn Flear (London, 2007) is entitled ‘Queen and Bishop versus Queen and Knight’ (pages 422-454). From his introduction to the topic, on page 422:

‘... I don’t necessarily agree with the clichéd adage that “the queen and knight duo are superior”.

This thought-provoking comment is generally attributed to the great pre-war technical specialist Capablanca. Is it that he felt that the queen and knight form a complementary partnership, whereas the strengths of queen and bishop are outweighed by their lack of flexibility, or even their incompetence, on one colour complex? It’s an interesting opinion, nevertheless, and one that is worth developing; especially as in most simplified positions, ceteris paribus, the bishop is generally considered as a superior piece to the knight. Determining whether or not the great Cuban was right is far from easy; for example, I have found no Capablanca games that would support his assertion.’

As regards the Cuban’s specific statements on the subject, we reproduce below our overview in C.N. 2696 (see page 200 of A Chess Omnibus):

‘In Chess Fundamentals, in a section headed Relative Value of the Pieces, Capablanca weighs the usefulness of bishop and knight in connection with other pieces and pawns, and states, in part:

How did this become “Capablanca’s contention that queen and knight are superior to queen and bishop in the ending is very insightful” in Steve Mayer’s Bishop versus Knight: The Verdict (page 209)?’

After also referring to the discussion of this matter on page 350 of Fundamental Chess Endings by K. Müller and F. Lamprecht (who write, ‘Is Capablanca’s theorem that queen and knight are better than queen and bishop true?’) and Secrets of Modern Chess Strategy by J. Watson (pages 71-74), our correspondent asks:

‘Did Capablanca ever state his “theorem” as strongly as these later writers suggest?’

‘Queen and knight, however, are stronger than queen and bishop. The outcome of a game often depends on being able to obtain this combination. In pawn endings a bishop is preferable to a knight; however, in queen endings the knight is stronger.’

In the ‘Endgame Masters’ chapter of Capablanca’s Last Chess Lectures the fifth of nine ‘simple but valuable rules’ was also categorical: ‘Queen and knight are superior to queen and bishop.’

However, such statements do not necessarily refer to a confrontation between these forces. Indeed, it was when discussing a position in which Black had queen and knight and White had no minor pieces that Botvinnik wrote:

‘The queen and the knight together work miracles here. Capablanca was the first to point out the strength of these two pieces working together.’

An historical remark in passing: to mention just one pre-Capablanca book at random, in The Art of Chess (London, 1895) James Mason noted (pages 92-94) that the ending queen and bishop versus queen was usually drawn, whereas queen and knight versus queen was frequently a win.

On the substantive issue, therefore, our tentative conclusion is that whereas some present-day writers have examined Capablanca’s ‘theorem’ in terms of queen and knight versus queen and bishop, the Cuban was more likely merely expounding (though not inventing) a general preference for the queen to be accompanied by a knight rather than by a bishop, regardless of what material the opponent held.