‘At the invitation of the British Broadcasting Company, Mr B.G. Laws on Saturday, the 16th ult., broadcast a short paper “The Art of the Chess Problem”, as an experiment. This included the presenting of three popular graceful problems selected to encourage likely students, at the same time entertaining and instructing those who already are interested. This is the first occasion in the history of chess that the medium of broadcasting has been used to popularise the subject.’

The event was also reported on page 135 of the July-August 1923 American Chess Bulletin, which quoted from The Times:

‘Music, the drama, art, politics, news, all have their place in broadcasting programmes, and now that chess has entered the portals it is to be hoped it has come to stay. Marconi House might keep its eye on such meetings as that of the British Chess Federation, for if the plea be justified that musical excerpts have resulted in a greater number of people booking seats for the various operas, then the interests of the oldest game in the world are well worth its consideration.’

Another quote from around the same time comes from page 9 of the January 1924 American Chess Bulletin:

‘According to the Minnesota Daily Star, in which J.M. Juran conducts a chess column, Dr E.E. Munns of Minneapolis broadcasted a talk on chess over the radio on December 15, urging encouragement of the games at school and in the home. He also gave a short discussion on the theory of the game and included some of Dr Emanuel Lasker’s maxims. Finally, he read a letter from Frank J. Marshall, United States champion.’

‘At last the British Broadcasting Co. have become aware of the fact that there is such a game as chess and that there are a large number of people in this country who take an interest in it.’

It referred to presentations on the radio by Tinsley and V. Menchik, but complained that Great Britain was far behind Germany, for example, where at least two stations were giving chess talks and lessons.

Page 125 of the 30 January 1926 issue of the Chess Budget specified that it ‘was not Mr E.S. Tinsley, the chess editor of The Times, who gave the wireless exposition of chess – but his brother, Mr S. Tinsley’. Vera Menchik’s radio engagement was briefly mentioned on page 53 of the February 1926 BCM.

From page 19 of the Cheltenham Chronicle and Gloucestershire Graphic, 3 November 1928:

Wanted: other sightings of the maxim ‘Move the right piece to the right square at the right time’.


In an article on the inside front cover of Chess Review, October 1951 Irving Chernev made a statement on which we would welcome particulars:

‘Reshevsky made his debut on the radio by singing a love song.’


As listed under ‘Broadcasting (radio and television)’ in the Factfinder, a number of C.N. items have discussed recordings of old masters in sound and/or vision, but very few specimens have yet been found, even though, in other fields, audio recordings from over a century ago are extant. For example, 19 sketches (patter and song) performed by Dan Leno (see C.N.s 4646 and 4647) between November 1901 and April 1903 are commercially available on a CD from Windyridge.

As regards radio output, have any recordings survived of the 1920s programmes in Germany which occasioned the book Radio-Schach by Edmund Nebermann (Berlin and Leipzig, 1926)? See also pages 265-266 of the September 1927 Deutsche Schachzeitung, but we lack any biographical data on Nebermann. ‘One of the finest games of chess ever played’ was the description on page 155 of the July 1952 Chess World. The same page had derision for Klein’s suggestion that in the final position he had a won game. 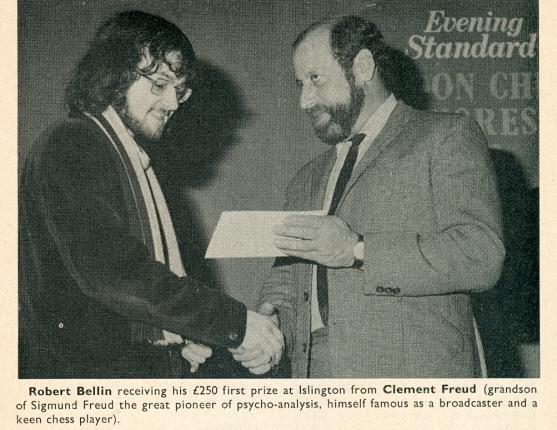 
Two well-known chess features on the radio were Capablanca’s lectures during the Second World War and the BBC series anthologized in Chess Treasury of the Air by Terence Tiller (Harmondsworth, 1966). For a comment on Fischer’s use of the medium in later life, see the Afterword in Instant Fischer.

The game was published on page 12 of the Lancaster Guardian, 28 October 1938 (chess column by W. Spark):


The conclusion of a report on a girls’ tournament (won by Vera Menchik) at the Imperial Chess Club, London on page 53 of the February 1926 BCM:

‘Miss Menchik wound up a most strenuous day by fulfilling an engagement at 10.30 p.m. with the British Broadcasting Company to give the result of the tournament over the wireless.’


From page 122 of the September-October 1935 American Chess Bulletin:

‘The Nottingham tournament was exceptional in yet another respect. The British Broadcasting Corporation suddenly became aware of the existence of the game of chess and agreed to give broadcasts on the opening and closing days of the tournament. The chief speakers on each occasion were A.J. Mackenzie, the controller, and Alderman Derbyshire, but Dr Max Euwe, Señor Capablanca and R.H.S. Stevenson also spoke.

There were also several broadcasts direct from the University buildings to Holland by Dr Euwe and others, and because of the keen interest in the tournament shown in Russia, there was a regular telephone service with Moscow, and the controller was actually interviewed over the telephone by the “Moscow Evening News”.’

On page xviii Watts discussed the closing dinner at the Victoria Hotel, Nottingham on 28 August 1936:

‘... much interest was shown in recordings of the broadcasts which were reproduced during the evening.’

Page 519 of the October 1936 BCM also referred to the closing dinner:

‘There was a pause from 8 to 8-15 while the account of the congress on the wireless news was turned on, and the gathering listened to Dr Euwe, J.R. Capablanca, J.N. Derbyshire and A.J. Mackenzie.’

‘Several radio broadcasters were arranged at which Dr Euwe, Señor Capablanca and others spoke; one of these broadcasts was switched on in the course of the farewell banquet for prize-winners and contestants from abroad. The Radio Times visualized a running commentary on a chess congress as a possibility of the future. During the congress Dr Euwe broadcasted several times from a room in the University to all stations in Holland.’

The Radio Times billings for the radio broadcasts about the Nottingham, 1936 tournament can be viewed on-line courtesy of the BBC’s Genome project (C.N. 8887):


We are grateful to David DeLucia (Darien, CT, USA) for permission to reproduce here four items from his collection which were shown on pages 266-267 of volume two of In Memoriam (Darien, 2012): ‘Starting at seven p.m. each Tuesday since the end of September, the BBC has given us a half-hour of chess. Never before in the history of British broadcasting has chess had such a show. Previously, it has been inexcusably neglected: only angling – equally numbering hundreds of thousands of devotees but equally hard to “put over” on the air – has suffered so badly.’ 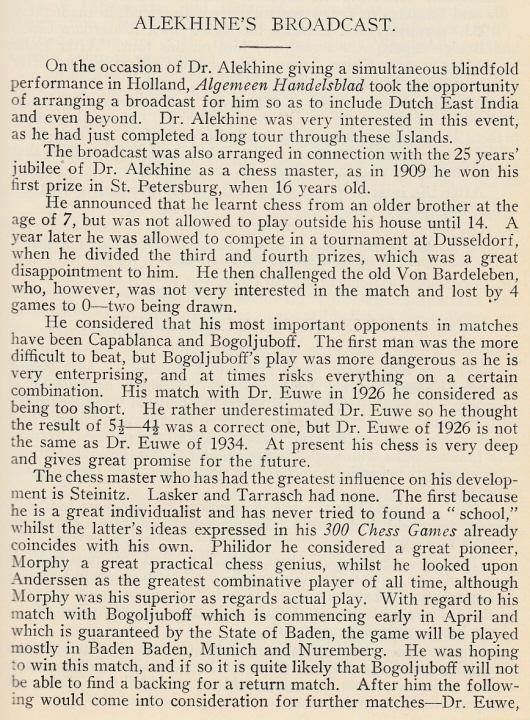 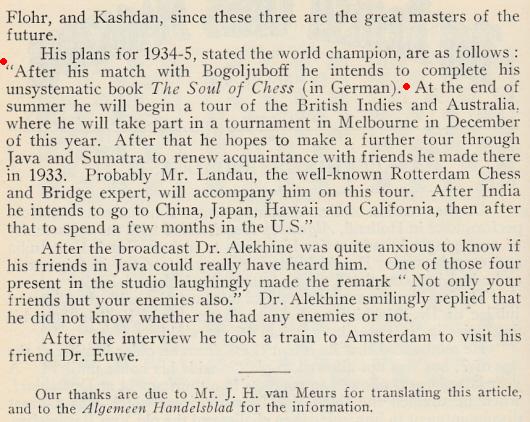 A small correction was published on page 181 of the April 1934 issue:

Regarding the ‘unsystematic book The Soul of Chess (in German)’ referred to in the BCM report, on pages 5-6 of Alekhine Nazi Articles (Olomouc, 2002) K. Whyld speculated that, although no such book ever appeared, ‘perhaps some of the ideas that were in Alekhine’s mind at that time appeared in the PZ [Pariser Zeitung] series’. It is unclear from the wording whether Chernev himself broadcast the material on the radio.

A radio project had been announced on page 146 of the September 1934 Chess Review: 
A reference to chess by the brilliant BBC broadcaster Eddie Mair.

Eddie Mair, primarily a radio broadcaster, left the BBC to join LBC in 2018.

‘Norag, the Hamburg wireless station, has engaged the famous master A. Nimzowitsch to broadcast a series of talks in October and November.’


Olimpiu G. Urcan (Singapore) informs us that he has acquired from the Netherlands Institute for Sound and Vision the right to post on his Patreon webpage a brief audio file of Euwe and Capablanca speaking, in Dutch and English respectively, during the AVRO tournament, on the occasion of the Cuban’s 50th birthday (19 November 1938).

An addition has been submitted by Michael McDowell (Westcliff-on-sea, England), from page 2 of The Problemist, January 1959: 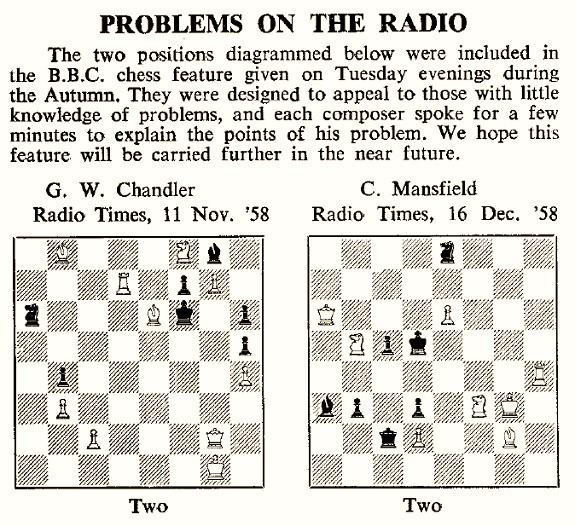 We add the related features in the Radio Times:


Browsing on the Radio Times website, we have noted the billing for a 45-minute radio play, The Queen’s Retreat by Tanika Gupta, broadcast on BBC Radio Four on 1 June 1999.