Frederick D. Rosebault was briefly Capablanca’s business associate and was involved in the Cuban’s failed attempts to secure a world championship match against Lasker in 1911-12. (See page 358 of A Chess Omnibus, as well as various references to Rosebault in our book on Capablanca.) In late 1912 the Capablanca-Rosebault partnership sustained a series of setbacks: the aborted world title negotiations, the failure of the planned New York/Havana tournament and the non-appearance of a projected magazine, The Chess Forum, but it is not known for certain why Capablanca broke off his relations with Rosebault that December.

Below, from our collection, is the Capablanca-Rosebault business card:

In 1987 we tried to find out more about Rosebault, having noted references to him in chess literature as ‘F.D. Rosebault of Westfield, NJ’. As reported in C.N. 1431, the Westfield Memorial Library informed us that the 1900 archives contained nothing on anybody named Rosebault. However, later city directories gave:

There was no subsequent listing in the directories.

The 1900 census provided some additional information on the Rosebault family:

The 1910 census gave the same data, except that the place of residence was Westfield.

C.N. 1461 added that the death of Leonard W. Rosebault, in Cranford, NJ, was reported on page 31 of the New York Times, 19 August 1965. It may be noted now that the US Social Security Death Index (as made available at www.familysearch.org) has his date of birth as 24 March 1886.

The earliest reference we have noted in chess literature to any Rosebault is on page 261 of the July 1905 American Chess Bulletin, which reported on a nine-board match ‘for the interborough scholastic championship of Greater New York’ (Manhattan v Brooklyn). On board three a player named Rosebault (no initial given) from Euclid School scored a draw for Brooklyn.

A key unresolved question has been when F.D. Rosebault died, but while preparing this item we came across the following webpage: http://www.interment.net/data/us/ca/losangeles/lanat/r/lanat_r10.htm.

This lists the death of a Frederick D. Rosebault on 16 December 1945, recording that he had been a Private in Company G of the 51st Infantry Regiment, 6th Division. It is unfortunate that no year of birth was stipulated, to settle beyond reasonable doubt whether he was indeed Capablanca’s mysterious business partner.


Walter B. Hart (Burra Creek, Australia) asks whether the moves of Rosebault’s game against Capablanca in the New York State Tournament on 22 February 1910, one of the very few scores absent from the 1963 Wildhagen volume on the Cuban by J. Gilchrist and D. Hooper, have ever been found.

We believe not. Our correspondent points out that an article by V. Fiala on page 19 of the 4/2000 Quarterly for Chess History stated that Capablanca’s victory was in 40 moves, and we have no information beyond that.


Below is ‘a lively little game’ at the Manhattan Chess Club which Rosebault  lost to an opponent who was playing blindfold:


Russell Miller (Chelan, WA, USA) adds some intriguing complications to C.N. 3559 above. As regards, firstly, the military record, he notes that the website www.ancestry.com has, under ‘Ohio Military Men 1917-1918’, the following entry:

Moreover, there is a World War I Draft Registration Card dated 8 June 1917 (Canton, OH) for Frederick Dana Rosebault, whose home address was given as YMCA, Canton, OH. It was furthermore stated that he was born in Brooklyn, NY on 27 July 1888, and the following particulars were added: ‘Special Officer for Canton Steel Foundry Co., no children, single, tall, blue eyes, brown hair, not bald, not disabled.’ The signature on the card was: Frederick D. Rosebault.

Next, our correspondent points out that the 1920 Federal Census listed, at 42 State St., East Orange, Essex Co., NJ, Walter Rosebault, his wife Sarah W. and their sons Frederick D. (aged 31, no occupation stipulated) and Alfred P. (occupation ‘US Army, Now in Europe’).

Finally, Mr Miller refers to the California Death Index at http://www.ancestry.com/search/db.aspx?dbid=5180. This lists a Sarah Parker, who was married to a man named Rosebault (forename not given), and a Frederick Danar Welles, who was born on 27 July 1888 in New York and died on 16 December 1945 in Los Angeles. Our correspondent suggests that Rosebault may have changed his name to Welles.

The evidence currently available does indeed strongly suggest that Frederick D. Rosebault, Frederick Dana Rosebault and Frederick Danar Welles were the same person. The one inconsistency in the birth-date is that the 1900 and 1910 censuses gave July 1887, whereas the other sources referred to above had (27) July 1888. (The year 1888 is also consistent with the above-mentioned reference to ‘aged 31’ for Frederick D. Rosebault in the 1920 census.) Both Frederick Dana Rosebault and Frederick Danar Welles are listed as having been born in New York on 27 July 1888 but, if they are indeed the same person, when and why did Rosebault change his surname to Welles? (The 1920 census listed his mother as ‘Sarah W.’ Did the W. perhaps stand for Welles?)

In fact, though, we can demonstrate a link between the names Rosebault and Welles. At the time Capablanca and Rosebault were in partnership, a brochure was issued by ‘Capablanca & Rosebault Chess Supplies and Literature, P.O. Box 1013, New York’. Just a few pages long, it was entitled A Brief Review of the Chess Record of José Raúl Capablanca, with the sub-heading ‘and the official announcement of his fourth American tour 1911-1912’. The author was named as Dana Welles.

Our copy of this extremely rare publication has seen better times, as may be noted from the reproduction below of the front cover: To summarize, the evidence currently available suggests that some time after the 1920 census Frederick Dana Rosebault changed his name to Frederick Dana Welles, having already used ‘Dana Welles’ as a pseudonym for the chess brochure which he issued jointly with Capablanca in 1911.


Russell Miller (Chelan, WA, USA) provides a family link between Frederick D. Rosebault and the name Welles. His mother’s maiden name was Sarah W. Parker, and from the webpage http://wc.rootsweb.com/cgi-bin/igm.cgi Mr Miller has determined that her mother was Sarah Welles, born in New York circa 1824.


Tom Rogers (Westfield, NJ, USA) has joined in the hunt for information about Rosebault and provides the photograph below of 514 Kimball Avenue, Westfield as it stands today. C.N. 3559 mentioned that Rosebault lived with his family at that address circa 1911. Olimpiu G. Urcan (Singapore) has sent us the following cuttings:

A report on the outcome of the case has yet to be found. 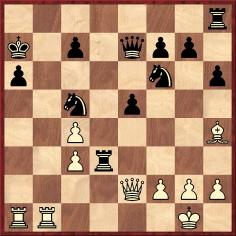 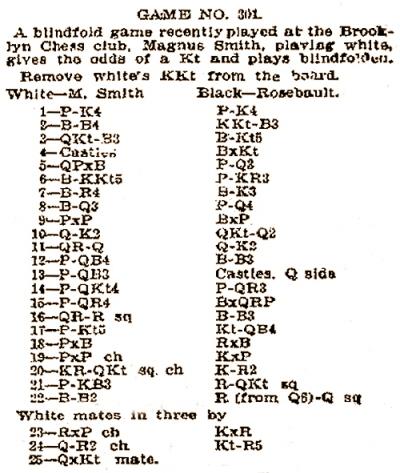 
Rosebault featured prominently in the satirical essay Polnische Wirtschaft in Amerika by Tarrasch towards the end of his book Die moderne Schachpartie (page numbers vary, depending on the edition).

Page 190 of the December 1920 American Chess Bulletin reported on the festivities held at the New York home of the violinist Mischa Elman on 7 December 1920. The guests, who presented Reshevsky with a diamond ring (the ideal gift for a nine-year-old ...), included ‘Mr and Mrs Rosebault’.


Russell Miller notes that according to the World War I Draft Registration Cards, 1917-1918 the second forename of Leonard Rosebault was Welles.

An early mention of F.D. Rosebault, as a winner in a solving competition, was on page 150 of the Chess Weekly, 10 October 1908.


In October 1986, Dale Brandreth (Yorklyn, DE, USA) sent us a copy of this score-sheet of an undated Rosenthal v Rosebault game:

The following transcription has been provided by Olimpiu G. Urcan: