We present a selection of photographs of Vassily Smyslov:


Page 144 of A Chess Omnibus quoted from page 32 of the February 1943 BCM, and below for the record is the magazine’s complete item:

This photograph of Smyslov comes from page 151 of the May 1943 Chess Review: 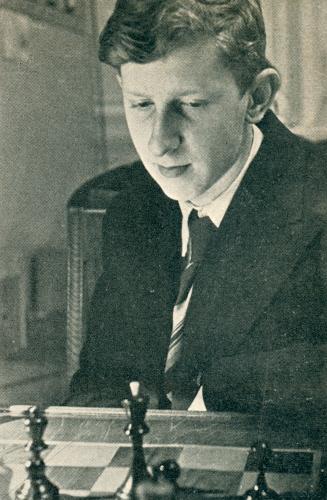 Game one in Smyslov’s book 125 Selected Games (Oxford, 1983) was his win as Black against Gerasimov (‘Championship of the Moskvoretsky House of Pioneers, Moscow, 1935’), and his concluding remark (page 20) was:

If a reader has that issue of 64 and can provide a copy of the Smyslov game, we shall gladly reproduce it here.

Calle Erlandsson (Lund, Sweden) has submitted Smyslov’s game against Gerasimov (Moscow, 1935), as published on page 3 of the 29 February 1936 issue of 64: 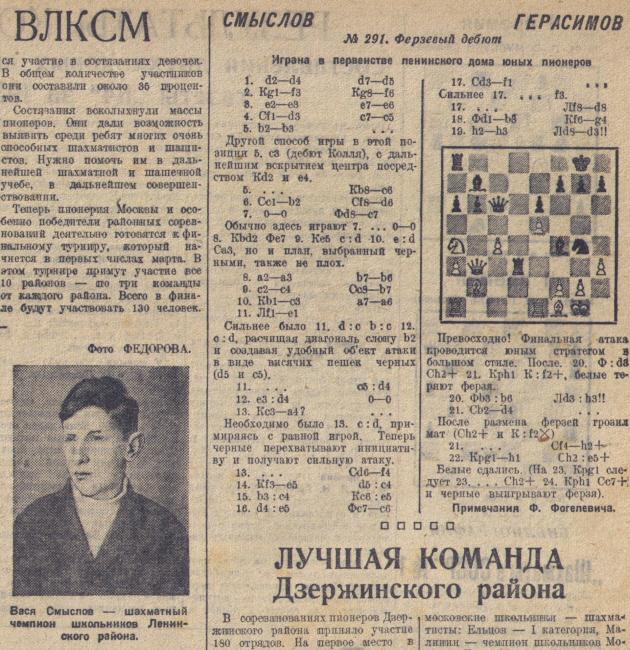 Our correspondent notes that the brilliancy, annotated by Fedor Lvovich Fogelevich (1909-1941), was presented as if Smyslov were White.


The photograph below (taken in Vienna in 1957) was published opposite page 81 of Chess A Beginner’s Guide by Stanley Morrison (Guildford and London, 1968):

Thomas Binder (Berlin) notes that an article about Bohatirchuk on pages 70-71 of the 6/2008 Rochade Europa includes this crosstable:

Our correspondent asks about the identity of the player who finished tenth.

Is it definitely established that he was Vassily Ossipovich Smyslov (1881-1943), the future world champion’s father? Pages 1-3 of 125 Selected Games by V. Smyslov (Oxford, 1983) featured reminiscences of early family life and included his father’s victory over Alekhine at St Petersburg, 1912. We should welcome further games played by Smyslov senior.

‘I have found another crosstable which mentions Smyslov of Kiev, published in the 8/1945 issue of Shakhmaty v SSSR in an article about the All-Union tournaments of first-category players. That year there were four semi-finals in different cities of the USSR. The crosstable of the Tallinn tournament (published on page 233) included Smyslov (of Kiev), who scored 6½/15 and shared 10-12th places. The article also gave, on page 234, a game which “Smyslov of Kiev” lost in that tournament to Serebriyskiy (of Kharkov): 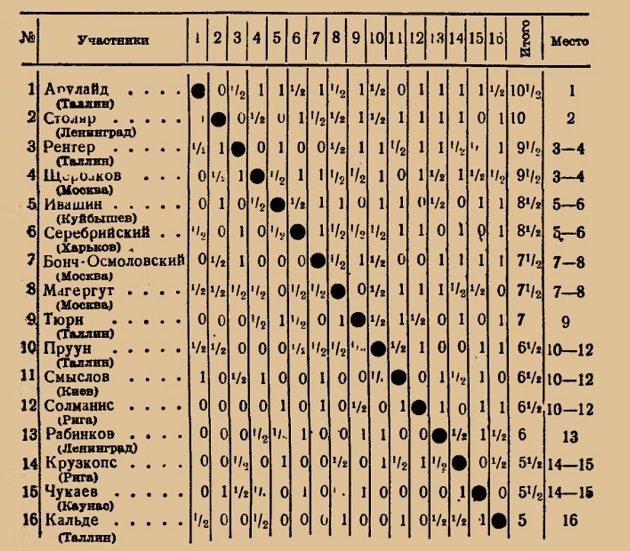 A player named Smyslov was also mentioned on the last page of the 13/1937 issue of the Ukrainian-language newspaper Shahist in a brief report on the semi-finals of that year’s Kiev championship: 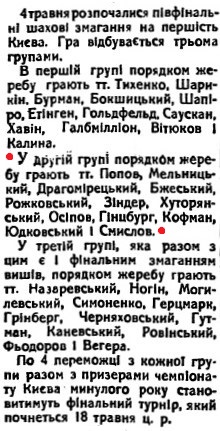 The semi-finals comprised three groups of 12 players, and the top players in each group qualified for the final. A player named Smyslov was in the second group, but he did not  finish among the top four and thereby qualify.

The following chronology is offered tentatively to suggest that Smyslov of Kiev and Vassily Ossipovich Smyslov were different people:


Another example of the quirkiness of CHESS, from page 73 of the 8 September 1956 issue: 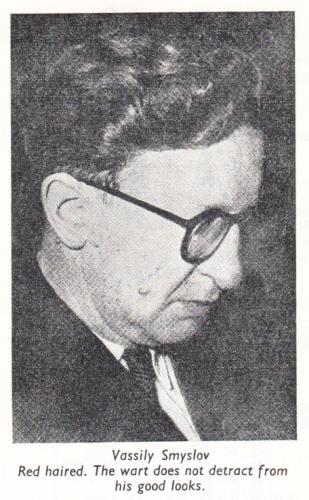 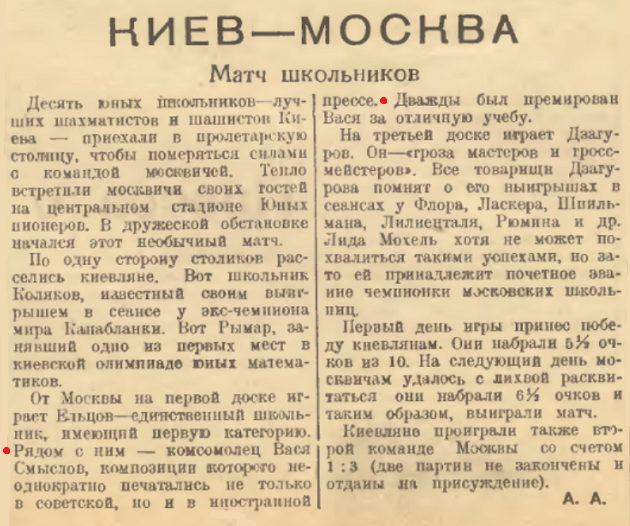 This report on a Kiev-Moscow schoolchildren’s match mentions Smyslov as a composer of chess studies published not only nationally but also abroad. Our correspondent asks whether 64 was correct and, if so, where Smyslov’s compositions were published outside the Soviet Union in or before 1936.


Sean Robinson (Tacoma, WA, USA) notes a remark by Spassky in an interview on page 23 of the Autumn 1998 Kingpin:

‘Smyslov is a chess player with a fantastic intuition. I call him “Hand” because his hand knows exactly on which square to put which piece at a given moment; actually, he does not have to calculate anything.’

Our correspondent asks whether earlier occurrences of the term are known.

He adds this slightly later citation from page 155 of The Unknown Bobby Fischer by John Donaldson and Eric Tangborn (Seattle, 1999): For observations on the physical appearance of Smyslov’s hands see page 57 of Chess Duels by Yasser Seirawan (London, 2010). Our correspondent reports that the reverse of the (undated) photograph states that it was taken in Sweden.

From page 104 of the November-December 1940 American Chess Bulletin, in a report on that year’s USSR championship in Moscow:

‘The play of the youthful Smyslov is of unusual profundity, originality and versatility. He invites complications and preferably selects difficult systems of defense. When opportunity offers, he is capable of giving a display of fireworks on the chessboard.’


David Prabitz (Graz, Austria) notes Vassily Smyslov’s slightly different accounts (i.e. with ‘father’ and ‘uncle’) of the first chess book that he was given as a child. Below are the Russian and English texts in three autobiographical works: 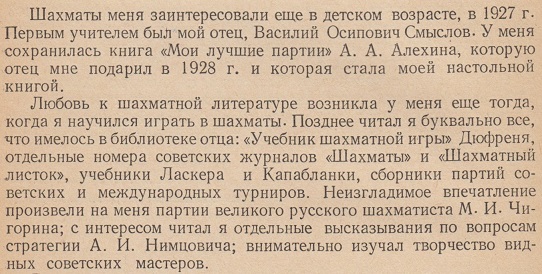 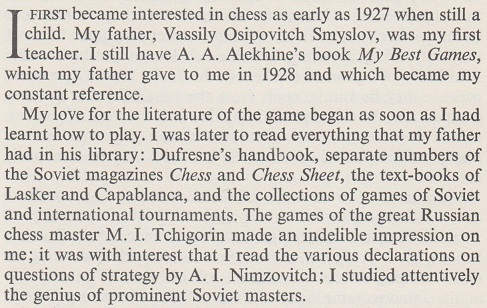 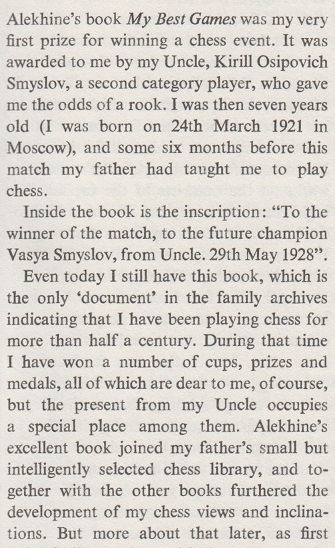 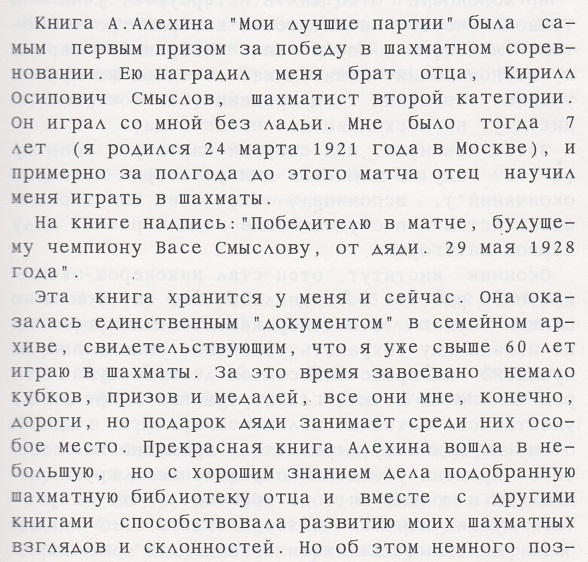 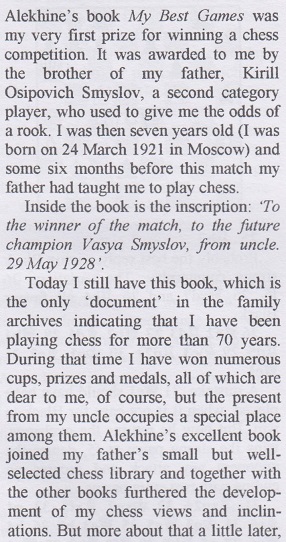 The first English translation was by P.H. Clarke, and the other two were by Kenneth P. Neat.

The Russian translation of Alekhine’s first Best Games volume was published in 1927, mentioning a print-run of 5,000 copies. The second edition (1928) stated that 7,000 copies were printed. 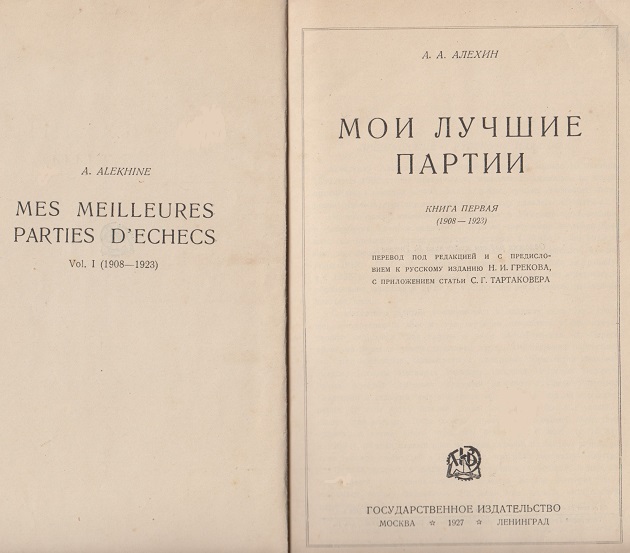 Notwithstanding the text opposite the title page, Alekhine’s book did not appear in French until 1936 and was not entitled Mes meilleures parties d’échecs. See C.N.s 4436 and 4439.


Olimpiu G. Urcan (Singapore) has obtained permission from the Keystone Pictures archives for two photographs of Vassily Smyslov (Hastings, 1954-55) to be reproduced here: Page 184 of the 22 January 1955 issue of CHESS had an account of these press reports by Ralph Hewins: