Land and Water (21 June 1873) gives what is the earliest case of 1 b4 that we have seen. The Oxford Encyclopedia of Chess Games by Levy and O’Connell has no examples, so was Rev. A.B.Skipworth the first to play it, in 1868?

(Notes from Land and Water)


The product of half a decade’s exertion, or inertia, was a 54-page booklet Débuts du jeu d’échecs with the subtitle ‘Leur désignation uniforme’, published in Prague in 1934 by officials of the Czechoslovakian Federation and revised by a FIDE Committee comprising Rueb, Przepiórka, Collijn, Grünfeld and Tartakower. Rueb’s introduction (page 6) described it as a first attempt at consistency (‘un premier effort vers la stabilisation de la nomenclature des débuts’) which did not claim to be complete, infallible or conclusive. Indeed, the term ‘avant-projet’ was still employed. A Preface by Louma stated that the ‘auteur du projet’ was Jaroslav Ferra. 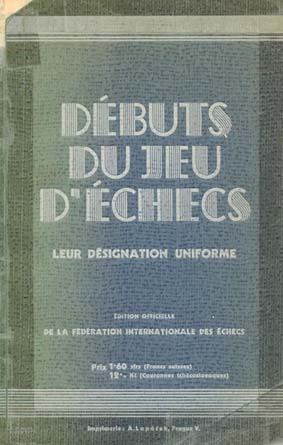 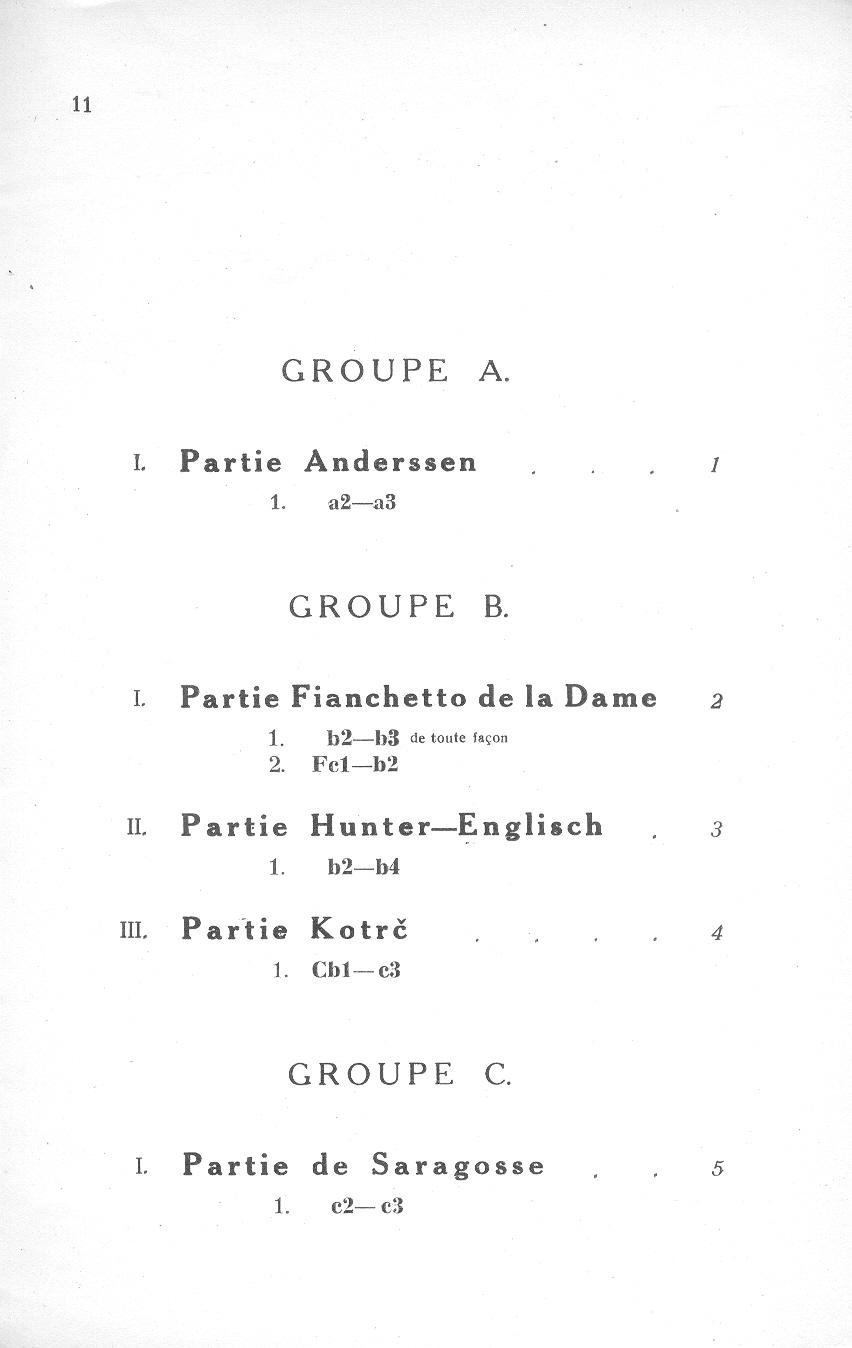 By way of example, below are some of the fruits of the quinquennium:

For more information about the booklet, see: Chess: The History of FIDE.

We have yet to find any such games, and shall welcome readers’ assistance. 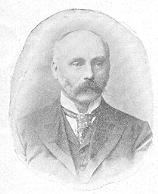 It was in the 1890s that the opening gained in familiarity (after Schlechter’s quick defeat of Fleissig in 1893, a famous game often misdated 1895), but at that time the heading ‘Irregular Opening’ was generally used. Hunt’s name was associated with 1 b4 only occasionally (e.g. on page 203 of La Stratégie, 15 July 1895). On the other hand, neither the obituary of Hunt in the BCM (July 1920, page 227) nor the autobiographical feature on pages 384-387 of the September 1902 issue mentioned the opening. The latter item does, however, contain the following information:

‘The only public tournament I ever entered was that of the Counties’ Chess Association, held at Oxford. There I was fortunate enough to draw with the Revs. Owen and Skipworth, and beat Trenchard, though I was nowhere after all.’


Following on from the previous item, here are some references concerning the opening move 1 b4:

Further information is sought. In particular, was Skipworth the first to play 1 b4, in 1868, and what more is known about the involvement of Hunt and Englisch?

The name Sokolsky Opening for 1 b4 is well documented.


In the following game, from page 23 of the Chess Weekly, 16 October 1909, ‘the players on each side made their moves alternately, without consulting’: 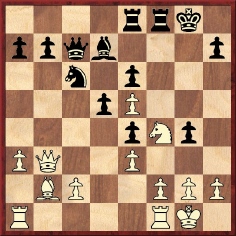 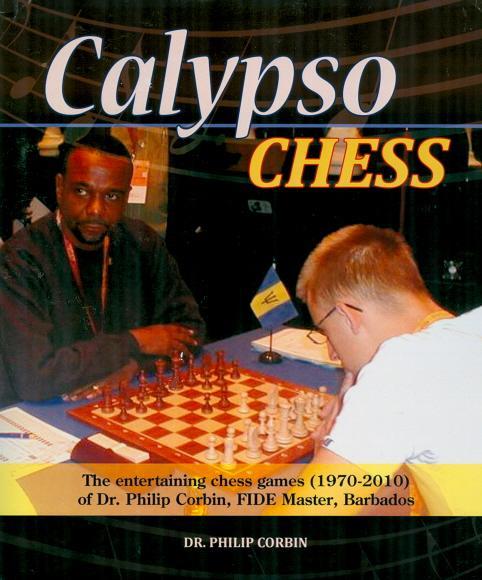 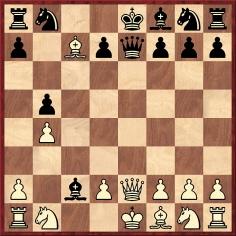 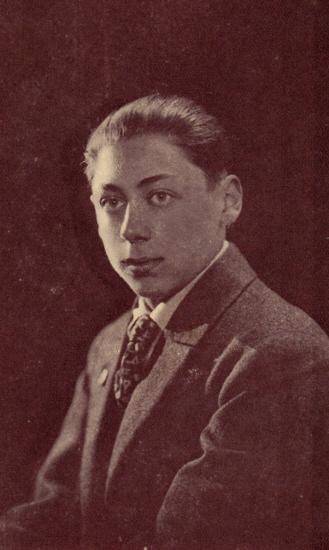 This photograph of Paul Limbos was published opposite page 376 of L’Echiquier, September 1929. As mentioned on page 402 of the same issue, he was aged 15 at the time: 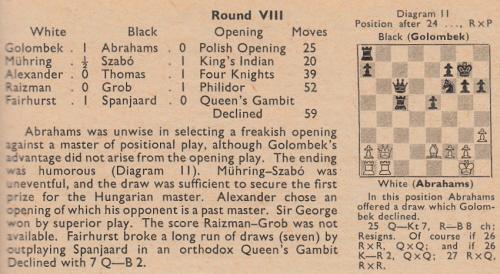 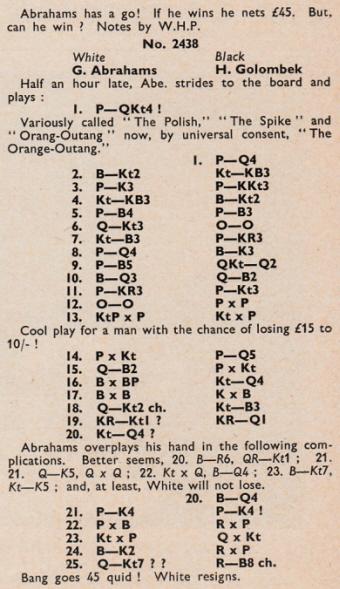 Although sometimes dated 1947, the game was played on 6 January 1948, as reported on page 7 of the Times the following day.

Citations regarding ‘The Spike’ are sought.

This opening, named after a gangling ape, was so dubbed at a time when 1 P-K4 and 1 P-Q4 were thought to be the only normal and therefore the only satisfactory debuts. Today such grandmasters as Pal Benko, Bent Larsen and William Lombardy have brought the opening into true prominence so that 1 P-QN4 may be considered as regular as any other opening. The obvious theme is the early attempt to gain a central pawn for a flank pawn, an exceptionally good bargain.’

A win by Léonardus Nardus, played at the Café de la Régence and published on pages 103-104 of La Stratégie, March 1913: 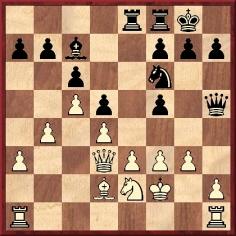 
An extract from our feature article on Frank Crowl:

‘Frank A. Crowl, the Australian Nimzowitsch, as we long ago dubbed him, is a player who cares absolutely nothing for orthodox theories. Even the almost universally accepted idea that White has an advantage by moving first is contradicted by him. Inspired by some articles in the old Wiener Schachzeitung (a great chess fortnightly [sic] which died when Hitler acquired Austria), he believes that the perfect game of chess would be won by Black. No-one can prove the contrary.’

The Chess World article concerned the previous year’s Victorian championship, and a specimen of Crowl’s play was introduced as follows:

‘The first game was considered by Dr Gellis [Max Gellis, the tournament winner] the best of the tourney, and when he himself was awarded the best-game prize for his game against Crowl he handed it over to Crowl – a typically Viennese gesture.’ 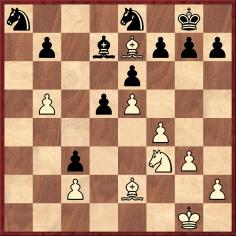 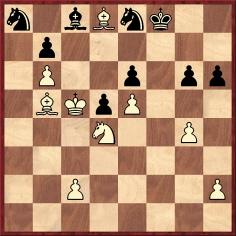 We turn now to 1...b5. The examples below go as far as the 1930s and omit relatively well-known games, the most famous probably being M. Euwe v G. Abrahams, Bournemouth, 1939.

Concerning one of the games listed in C.N. 4014 above, Hicks v Chajes, Eduardo Bauzá Mercére (New York, NY, USA) reports that it was played in the Manhattan Chess Club championship and was published by Hermann Helms on page 16 of the New York Evening Post, 9 February 1918: 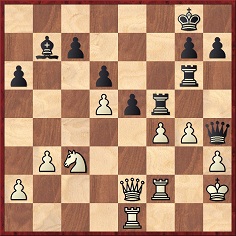 
Alan McGowan (Waterloo, Canada) has the following Kurt Richter games in his collection:

Alan Smith (Stockport, England) submits the following game from page 6 of the Croydon Guardian, 5 February 1881, won at the Leicester Club in 1881 by Joseph Steele (the Guardian’s columnist) against a player named Atkins: