Our Chess Awards article (C.N. 3157) discussed the shady ‘International Chess Writers Association’, whose Director, Mr Dimitrije Bjelica, has presented awards to an individual somehow picked by the ‘Association’ as the world’s best chess writer. For a lesson in excellence we therefore turn now to one of Mr Bjelica’s own books, Wonderful world of chess (published by ‘Chess press, Munchen’, undated).

When on page 189, the correct spelling Schlechter capriciously occurs, the opponent’s name goes wrong (‘Tiz’ instead of Tietz). It is but poetic justice that another wayward speller, Koltanowski, should have his name mangled by Mr Bjelica (i.e. ‘Kolatnovki’ on page 183).

Regarding the pawn ending discussed on page 42 of A Chess Omnibus, Fahrni-Alapin emerges as ‘Fharvit-Alpin’ on page 25. Some of the position headings seem almost to have been written in code. Page 43 has ‘Snosko Borovski-Preis Remsget, 1929’. Another English seaside resort that defeats Mr Bjelica comes on page 167, in a game which ‘Cole’ (he means Colle) won in Scarborough. He writes ‘Scerborou’, and it might just as easily have been Scooby Doo.

Page 71 says that Morphy lost only one blindfold game in his life, ‘in Birmingham in 1838’ (or ‘Brimingham’ on page 183). He was one year old at the time, and the mystery deepens when page 79 reports that he also lost a blindfold game in an ‘exibition’ in Paris. On page 51 Fischer is quoted regarding the best game ever played: ‘Mayby one of Adolf Andersson’s or Morpy’s.’ Page 171 cites Tal: ‘There are two kind of sacrifices – the corrects ones, and mine’s.’ On page 181 comes a famous remark attributed to Teichmann (‘Teichman’): ‘Chess is 99 of tactisc.’

Yet in the anecdotal snippets there are also passages of good English. Mr Bjelica being Mr Bjelica, the reason is not difficult to guess: the snippets have been snipped from other people’s books. The most blatant case of plagiarism concerns Wonders and Curiosities of Chess by Irving Chernev (Dover Publications, New York, 1974). Without any mention of Chernev or his book, many items have been crudely chopped up and reproduced in photographic form as Mr Bjelica’s own work. To illustrate the extent of the theft, here is page 62 of the Chernev book:

Enter Dimitrije Bjelica, armed with scissors, glue and photocopier, but no ethics. The result is the following, on pages 97 and 115 of his book:

A brief paragraph about linguistic skill on page 49 of Bjelica’s Wonderful world of chess compared ‘Ben Larsen’ to ‘Johanes Zukertot’ and concluded: ‘But Larse favourite player was not Zukertot but Nimzovic.’

There is less fantasy with the modern masters, although the first issue does have an article by ‘Pol Banko, Granmster (USA)’.

The Times of 22 April 1995 (page 20) reported in all seriousness that Mr Raymond Keene had been named Chess Journalist of 1994. A photograph showed him receiving an engraved statuette from ‘Demetri Djelica’ [sic] who was described as the Director of the ‘International Chess Writers Association’. No information was offered, then or later, about the origins or composition of this hitherto unknown set-up.

Outside The Times’ pages, the Director is better known as Dimitrije Bjelica, whose exploits include a two-volume work on Fischer: Robert Fišer – Genije koji se ne vraća (Belgrade, 1984). On pages 8-9 of its 5/1986 issue, New in Chess published a letter from Christiaan Bijl, the compiler of Die gesammelten Partien von Robert J. Fischer (first published in 1976, with a revised edition in 1986). Extracts from the letter are reproduced here with the kind permission of New in Chess:

‘... When he [Bjelica] started volume two it seems that he suddenly got very tired after having written page 49. From page 51 onwards to page 241(!) he tries to give Fischer’s games, introduced by the misleading heading ‘Sve Fišerove partije’ – the complete games of Fischer – but in fact he gives only a poor sixty per cent of them. To my surprise Bjelica has boldly used exact replicas of the copyrighted lay-out of my work ... Puzzled and dazed the reader discovers that games are completely cut to pieces, or rather spoiled in cuttings. Names of players are corrupted (...), authorised annotations are copied or badly cut off. Bjelica collected diagrams from my original edition, several of which he inserted in wrong places and he even used diagrams without the game scores! ... From some games he omitted moves or names of players, added the names of annotators between the moves of an unannotated game, or replaced the actual game moves by a variation. He created even a seven move miniature of Fischer versus Petrosian, and he outrageously omitted in many cases the sites of play and the game-numbers in matches ... The book oozes contempt for its buyers and is an insult to Fischer, who broke off all connections with Bjelica in 1971 after he had been cheated by this “friend”.

It is known in the chess-world that Bjelica’s reputation is a dubious one. With [this] publication he added another outrage of the worst sort to his long list of non-fulfillments, gross falsehoods and impostures.’

Mr Keene will surely triumph again if another such award is offered. Who else would even consider accepting it?

Our above-mentioned article Chess Awards also related the only subsequent news of the ‘Association’: in 2000 Mr Bjelica handed out a further award, and it was naturally to Mr Keene again.


The dates of Emanuel Lasker’s world championship reign, 1894-1921, are well known, but even an elementary matter like that can unhorse someone like Dimitrije Bjelica. Page 126 of his book Šahovska Čitanka (undated, but circa 1966) had the following: 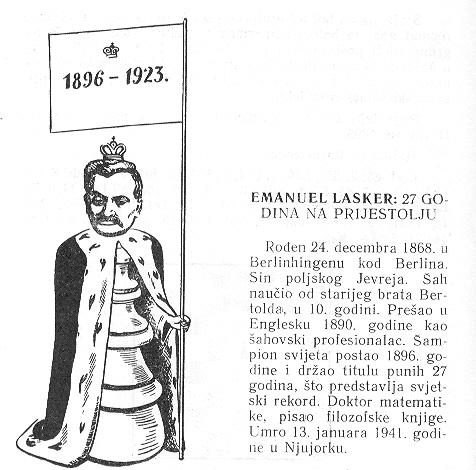 
Although Ajedrez La lucha por la iniciativa by Orestes Aldama Zambrano (Barcelona, 2000) refers to Fisher and Meking on the first page of text, it is a monograph on Capablanca. His opponents include Atkeens, Berstein, Bofoljubov, Corso, Kreymbour, Kupnich, Kvitz, Rogoljubow, Rubistein, Spielman and Tartakowwer, and all this may be termed ‘doing a Bjelica’.

The multiplicity of formats, styles and typefaces pervading the book has an obvious explanation: Mr Bjelica’s clippers and glue-pot have been in action yet again. For example, pages 235-236 have a table of Karpov’s tournament results which is reproduced (without permission or acknowledgement, naturally) from a book edited by us, World Chess Champions (Oxford, 1981). Similarly, on pages 230-234 Mr Bjelica lifts (i.e. steals) from our book the entire list of 28 world championship matches held from 1886 to 1978. By the time Kasparov protiv Karpova was published, of course, Karpov and Korchnoi had played a further match, in Merano, and one can only marvel at the conscientious artistry with which Mr Bjelica updated our work:


Sandwiched between material plagiarized from World Chess Champions there appears on page 234 of Mr D. Bjelica’s Kasparov protiv Karpova a chart which, gratifyingly, does not come from our book:

Alan O’Brien (Mitcham, England) points out that the chart of world title match results shown in C.N. 6617 was lifted by Dimitrije Bjelica from a book by C.H.O’D. Alexander:

C.N. 9452 mentioned that copying usually goes hand-in-hand with incompetence, and it will be noted that misalignment on page 234 of Bjelica’s book resulted in a shambles:

On page 20 of The Times, 22 April 1995 Bjelica was referred to as the Director of the International Chess Writers Association.


Bjelica may truly be considered the quadrupled pawn of chess writers.


Further to the reference in C.N. 7466 to the ‘board problem’, a far rarer occurrence is an inverted diagram in a book. An example comes from page 174 of Il mio amico Karpov by D. Bjelica (Abano Terme, 1981): 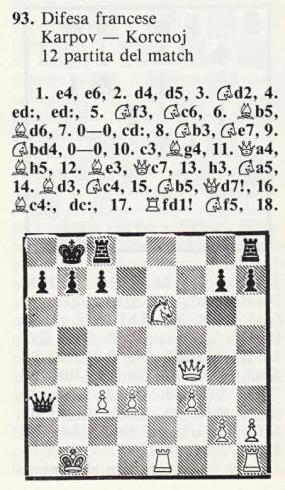 The position (after 21 Nxd6) was correct in the original edition; see page 252 of Rekao mi je Anatolij Karpov (Belgrade, 1981). In the context of the 1986 world title match, on page 144 of The Longest Game by Jan Timman (Alkmaar, 2019) there is no mincing of words about Bjelica:

‘Karpov did not have a clear delegation leader, but he did have a press attaché: the Yugoslav Dmitri Bjelica. That was a strange choice, as Bjelica was known as a gutter journalist who wrote books that were full of printing errors and plagiarisms.’

Following the reference to D. Bjelica in C.N. 11585, a look at his current Wikipedia entry seems timely:

Given the alleged existence of ‘over 80 books in 180 editions’, it is an act of mercy that (contrary to the Wikipedia articles on, for instance, Bruce Pandolfini and Eric Schiller) the entry eschews a list and mentions only one alleged volume. However, that solitary reference, ‘Reyes del Ajedrez ISBN 84-88155-32-8’, is worthless because Bjelica had a series of books published under the generic title ‘Reyes del ajedrez’; the ISBN number given – randomly, it seems – is for the volume on Botvinnik (Madrid, 1994).

The first paragraph also affirms that Bjelica was ‘the arbiter at tournaments like Linares’. Which tournaments are ‘like Linares’ is an open question, and, in any case, no substantiation for the alleged role is provided. There is, at least, a little something on page 177 of the May 1988 BCM, in a report on the sixth ‘Ciudad de Linares’ tournament: ‘the chief arbiter was Viktor Baturinsky, helped by Dimitrije Bjelica and Diego Martinez Linares.’

Still in the first paragraph of the Wikipedia entry, we contend that ‘contends’ is far too weak a word in connection with the rifeness of misspellings and plagiarism in Bjelica’s books. It is not a contention, but the expression of an incontrovertible fact. The first of the two ‘References’ on the Wikipedia page will take the reader to Jan Timman’s description of Bjelica: ‘a gutter journalist who wrote books that were full of printing errors and plagiarisms.’

The references to ‘Black Oscars’ (with and without quotation marks) and ‘White Oscars’ (without quotation marks) appear outmoded, incomplete, unsubstantiated and irrelevant. Awards involving Bjelica need to be treated with the utmost caution. None of the ‘External links’ leads anywhere of value. The ChessBase one relates to a 2004 article with much dubious wording identical to what is still in the Wikipedia entry for Bjelica even today.

According to the first paragraph of the entry, Bjelica (a ‘FIDE Master’ with very few published games) ‘can be found in the Guinness Book of Records for playing a 312-board simul in Subotica in 1997 (score: +219 −1 =92)’, with the implication that the alleged record is still valid today. In which edition or editions of that book can such a display be found, and on whose authority was it included? We lack almost all pre-2005 editions of the Guinness work, but can confirm that Bjelica is not mentioned in any edition from 2005 to 2020.

On that unspecified day in 1997 did the ‘FIDE Master’ really dethrone Ulf Andersson, who had (although his own Wikipedia entry does not mention it) played the previous year against 310 opponents simultaneously in Älvsjö, Sweden? On that performance an illustrated, documented report was published on pages 32-33 of the January 1996 issue of Tidskrift för Schack. A basic search in Google Books shows that Bjelica was listed by Guinness in a number of editions in the 1980s, for an earlier alleged display:

Without demurral, that claim was presented as still being a record on page 132 of The Even More Complete Chess Addict by M. Fox and R. James (London, 1993), but on what grounds? Video coverage of record attempts today often shows a Guinness adjudicator, ascetically dressed, with a pair of severe glasses, an unforgiving stopwatch, and pen menacingly poised over clip-board, but was any such invigilator present in Sarajevo during Bjelica’s alleged display? And what proof or corroboration was published in reliable Yugoslav sources of the time?

Concerning any alleged exploit by Dimitrije Bjelica there is, at the very least, fog. Nowadays, Wikipedia has some excellent chess entries, but Bjelica’s is currently one of the worst.