Jeremy Gaige’s Chess Personalia (Jefferson, 1987) states that Irving Chernev was born on 29 January 1900 in Priluki (Ukraine), but we note that at the familysearch.org website the birth-date 17 June 1899 is indicated.

‘January 1900’ was given on page 7 of Chernev’s last (posthumous) book, 200 Brilliant Endgames (New York, 1989), i.e. in an affectionate introduction by the book’s editor Adam Hart-Davis, who met Chernev a number of times. Mr Hart-Davis has now informed us:

‘I do recall Irving saying that he could always remember how old he was because he was born in January 1900, and therefore was as old as the current year.’

A letter from Irving Chernev’s grandson, Melvin, to Andrew Soltis was published on page 6 of Chess Life, October 2018, written on behalf of his father, also named Melvin, and co-signed by Celia Ann Chernev. From the first paragraph:

‘As you stated, Mr Chernev was born in 1900 in the Ukraine, and he came to Brooklyn, New York in 1905 with his parents and siblings.’ Chernev gave ‘some personal opinions’ on page 28 of the November-December 1933 Chess Review. They included the following:

Asked about chess books which had a profound influence on him, John Nunn replied (see the 3/2002 New in Chess, page 98):

‘I was referring to the 1924-37 volume by Alekhine. I recall being particularly impressed by 18...Nxf2 in Rubinstein v Alekhine, Semmering, 1926, or rather the fact that Alekhine must have seen it some time in advance.’

Most C.N. items mentioning Irving Chernev have concerned chess history and lore, but he was an exceptionally entertaining annotator. The Most Instructive Games of Chess Ever Played was published by Simon and Schuster, New York in 1965 and by Faber and Faber, London the following year. The US publishers also brought out a Fireside paperback edition (undated), and in 1992 the work was reprinted by Dover Publications, Inc., New York. An algebraic version has yet to be produced and would be very welcome.

C.N. 8196 discussed The Most Instructive Games of Chess Ever Played by Irving Chernev, a book which had a profound influence on John Nunn, and we commented: ‘An algebraic version has yet to be produced and would be very welcome.’

An algebraic edition has now been published, by Batsford (‘an imprint of Pavilion Books Company Limited’). When it first appeared, in the mid-1960s, the book received extensive coverage in Chess Review, although not in Chess Life, and on page 39 of the February 1966 Chess Review an advertisement listed all 62 games selected by Chernev: The February 1966 issue of Chess Review also had, on pages 46 and 64, a lengthy, highly favourable review by John W. Collins. As regards the production standards he observed:

‘Designed by Cecile Gutler [sic – Cutler], the physical aspects of the book are attractive. The cover design and frontispiece by Edward Sorel is one of the most original to appear. The binding is red and sturdy, the paper and type good ... and the photographs striking (these last are a welcome additive too many publishers omit for economy).’

All the photographs have been omitted from the Batsford edition. In common with other recent Batsford books (most notably, the 2008 edition of Fischer’s My 60 Memorable Games), the volume as a whole (a paperback, naturally) looks drab, despite some attempt to replicate the textual lay-out of the original.

‘Drab’ would never describe Chernev’s writing, and in The Most Instructive Games of Chess Ever Played he was perhaps at his best. Collins wrote:

‘... one feels this latest book is the true Chernev, one might say the ultimate Chernev. It gives full vent to his enthusiasm, wit, admiration of the positional-strategic and his encyclopedic knowledge of the Royal Game. Much of this is evident in his previous works, but this time it all comes out.’

This reference to Chernev’s qualities, and not least his knowledge, is certainly justified. Although C.N. items have shown that he sometimes cut corners, he was active at a time when writing and scholarship were not regarded as a natural pairing and when anecdotes and other chestnuts were particularly prevalent. Few were interested in sources. Above all, in the pre-digital age the work of writers in his field was far harder; they could not fill in gaps in their knowledge with press-of-a-button ‘research’.

Chernev’s output – clear, humorous and easy-going – gave the impression of effortlessness, but much industry lay behind it all. On 19 January 1977 he wrote to us:

‘I think you will be pleased to hear that I have sent off to Oxford University Press my completed manuscript of Capablanca’s Best Chess Endings, a labour of love (and hard work).’

Although his prose was often conversational, it was literate and carefully structured, bearing no resemblance to the ultra-casual ‘I’m-just-one-of-the-lads’ stuff increasingly seen in chess books and magazines since his time. We have also been struck by the scarcity of typographical errors in Chernev’s writing throughout his life.

Relatively few of his own games are readily available, although it is not difficult to find unknown or little-known scores. Two games from Section B of the preliminaries for the 1942 US championship, including the one below against Altman, were published on page 29 of the March-April 1942 American Chess Bulletin. A third game from the same event was published on page 63 of the July-August 1942 American Chess Bulletin: The Westbrock game was also on page 16 of the Brooklyn Daily Eagle, 2 April 1942:

The Eagle was apparently mistaken about Chernev’s place of birth (‘here’). His date of birth was discussed in C.N. 3007 (see page 98 of Chess Facts and Fables).

The most detailed article about him is ‘An Invitation to Chernev’ by Jerome Tarshis on pages 500-503 of Chess Life & Review, September 1979. Some recollections quoted on page 501:

‘The writing that I did was done on weekends and after hours ... It was only when I had an idea that I thought merited a book that I would do a book, and then I would spend a lot of time on it. For example, when I wrote The 1000 Best Short Games of Chess, I went through some 15 to 20 thousand games, to pick out games that were dissimilar and weren’t just baby traps, or dreadful blunders in the opening.

When I wrote Logical Chess Move by Move – and this also applies to The Most Instructive Games of Chess Ever Played – I went through hundreds and hundreds of games that were mostly positional in character. I wanted to be able to point out that the positional play was more important, and that the combinations would come of themselves.

It wasn’t easy to choose the games. In a lot of fine games there are a great many moves that are not exactly meaningless but are difficult to explain to the average or below-average player. And it wasn’t enough for me to find a good game where the two bishops are better than the two knights. I wanted to find the very best example.’

‘I thought I was the only one who saw that The Human Side of Chess was written with venom. But then, Reinfeld hated impartially! He hated Morphy, Alekhine and Capablanca most of all. He hated all chessplayers – except those who bought his books. Those he despised.’

For an examination of Chernev’s reliability regarding stories about chessplayers, see Chess Anecdotes.


Gerard Killoran (Ilkley, England) notes that a century ago reports in the Brooklyn Daily Eagle referred to Isidore, not Irving, Chernev. One of several instances is on page 38 of the 15 October 1916 edition:

‘I have examined the United States Federal Census for 1910 and 1920 covering the Brooklyn area of New York. In 1910 the following family members were living in Brooklyn Ward 16, Kings, New York: William Chernev (aged 34), Mollie Chernev (33), Isidor Chernev (10), Celia Chernev (8) and Rose Chernev (4). The family had emigrated from Russia in 1907; William was a retail merchant dealing in groceries.

The 1915 New York State census had the forename Isidor. According to the New York Death Index, Mollie Chernev died, aged 42, on 18 October 1919 in King’s, New York.’

The above passage about Logical Chess Move by Move by Irving Chernev comes from page 80 of the March-April 1967 Chess World. It was omitted from page 65 of The Search for Chess Perfection II by C.J.S. Purdy (Davenport, 2006) and from page 147 of The Chess Gospel According to John edited by R.J. Tykodi and Bob Long (Davenport, 2010). In both books its place would have been just before the paragraph beginning ‘In this series ...’. 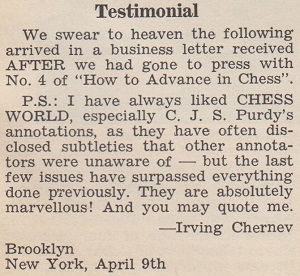 Purdy’s ‘How to Advance in Chess’ article was on pages 77 and 80 of the same issue. Most of his praise of Irving Chernev was quoted in C.N. 9713, but below is an additional passage in which Purdy related that he had recently given a chess lesson, lasting just over an hour, to a 13-year-old girl, ‘a fairly raw beginner’:

‘What would I charge for such a lesson normally? Well, at least $4, assuming I was willing to give one at all. Not many beginners care to pay so much for early lessons.

What is the answer? I saw it at once, and told the pupil, who realized I would not have time to give further lessons.

Ten years ago there was no answer. Now there is. It is Chernev’s Logical Chess Move by Move.