‘One of the most remarkable Grünfelds ever played’ is how Jack O’Keefe (Ann Arbor, MI, USA) described the game below when submitting it to us some 23 years ago (see page 141 of Kings, Commoners and Knaves):

Why remarkable? Because the game was played not just before Grünfeld’s career but even before Morphy’s. According to the Chicago Tribune of 13 July 1879, which took the score from the Glasgow Herald, the game was played between Cochrane and Moheschunder in May 1855. It was also annotated by Steinitz in The Field of 6 June 1874.


A question discussed in C.N. 1157 is when Howard Staunton’s supposed contribution to hypermodernism was first noted. We offered this passage from page 360 of the August 1926 BCM:

C.N. 3764 recalled that in the chapter ‘Ahead of Their Time’ in The Chess Companion (New York, 1968) Irving Chernev declared himself intrigued by Elijah Williams’ performance at London, 1851. From page 184:

‘Was his prolonged thinking part of a plan to infuriate his opponents? Or was it because he was slowly evolving a new system of play?

The terms “Double Pawn Complex” and “Zugzwang” could have had no meaning for Williams, but here, in two games [against Löwenthal and Staunton], we have this Nimzowitsch of a hundred years ago demonstrating these concepts.’

Chernev’s item originally appeared as an article on page 340 of the November 1955 Chess Review. We should like to know whether other writers have attempted to back up his theory; nothing particularly helpful has yet been found in Williams’ book Horæ Divanianæ (London, 1852) or in other sources.

Even J.H. Blackburne has been suggested as a possible precursor of hypermodern play. From page 207 of The Game of Chess by Harry Golombek (various editions):

‘His games, though so strongly influenced by Morphy, also curiously foreshadow the most modern developments. For example, as early [as] in 1883 at the great international tournament in London he was playing as Black the first three moves of Nimzowitsch’s Defence to the Queen’s Pawn, three years before the birth of Nimzowitsch; whilst his English opening at Ostend, 1907 was remarkably similar for some 12 moves to the system evolved many years later by Réti.’

That claim was mentioned in C.N. 283, and in C.N. 411 W.H. Cozens (Ilminster, England) gave his view on whether Blackburne’s games showed evidence of a system:

On page 260 of Chess Explorations we added that the Blackburne games from Ostend, 1907 which Golombek appeared to have in mind were against E. Znosko-Borovsky, W. John and E. Cohn.

‘The Polish master Alexander Flamberg was a highly gifted player with profound and original ideas. Chronic ill-health prevented him from ever asserting his full powers.

Concerning one of his notable games – one of the most significant in the history of chess – his countryman Przepiórka has commented as follows: “When one examines the opening moves and the subsequent course of the game, it is almost incredible that it was played in 1914 ... The double fianchetto of the bishops, the operations on both wings, and later on the manoeuvers with the black knights and the posting of the queens on the long diagonal – all these ideas are, as we know, considered the very latest achievements of the Hypermoderns.”’

The comments by Przepiórka appeared on page 34 of the February 1926 Wiener Schachzeitung. He used the term ‘A Prophetic Game’ to describe Flamberg’s victory:

It may be felt that calling the game ‘one of the most significant in the history of chess’ is an exaggeration, but the play is certainly an early illustration of hypermodern tenets.

‘... in which a high-school boy (whom I knew) won by some Nimzowitsch ideas which were new then to the world – and possibly even to Nimzowitsch.

... Look at it carefully, and you’ll see why I was startled.’

The game was played in a simultaneous exhibition (+48 –5 =12) in the Auditorium of the Brooklyn Daily Eagle and was published on page 46 of the March 1915 American Chess Bulletin:

On page 2 of its 13 February 1915 issue the Brooklyn Daily Eagle reported:

‘Max Wolfson, the bright-faced captain of the well-nigh invincible team at Boys High, must be regarded as the real hero of the occasion. Single-handed he engaged the famous master opposed to him and, after playing an irregular defense, which led to a most complicated game, succeeded in forcing the Cuban’s resignation after 36 moves. Capablanca gave in when he faced a mate in two moves, and the sensational sacrifice of a rook, which accompanied it, elicited from him the remark “Very fine”.’

Regarding this game and a subsequent draw by Wolfson against Boris Kostić, see Max Wolfson: Unwitting Pioneer by Olimpiu G. Urcan.


Two or three years before the Capablanca v Wolfson game was played, the word ‘hypermodern’ had begun to appear in German chess literature. As mentioned in Earliest Occurrences of Chess Terms, page 265 of the August-September 1913 Wiener Schachzeitung had the following in an article by S. Alapin entitled ‘Neue Gendanken über modernes und unmodernes Schach’:

The word ‘hypermodern” also appeared in the Editor’s preface to the article, on page 253.

Oxford English Dictionary: ‘What is claimed as hyper-modern turns out to be ... respectably medi[a]eval.’ BCM, September 1923, page 338.

The same page of the BCM, the item being a review by P.W. Sergeant of Réti’s Modern Ideas in Chess, referred to Réti discussing ‘the school of the Hyper-moderns’ and also contains the remark ‘But this is scarcely hyper-modern’.

Concerning Gyula Breyer, and his alleged remark that after 1 e4 White’s game is in the last throes see Breyer and the Last Throes.

The above photograph first appeared in C.N. 7812, courtesy of Michael Negele (Wuppertal, Germany).


For an historical article on 1 e4 Nf6 see Alekhine’s Defence.


It is not always clear who should be regarded as a hypermodern player. C.N. 653 mentioned the case of Efim Bogoljubow, pointing out that on page 106 of The Immortal Games of Capablanca (New York, 1942) Reinfeld described Capablanca v Bogoljubow, London, 1922 as the Cuban’s ‘first encounter with an outstanding Hypermodern master’. However, we added that a random check of tournament books of some of Bogoljubow’s greatest triumphs in the 1920s indicated that his opening play was extremely classical, with barely an Indian Defence, Réti Opening, etc. in sight.


C.N. 815 reported that in the 1920s there was discussion of how much newness there was in the ‘Hypermodern Revolution’ and whether much of it was skilful propaganda, and we commented that the earliest article known to us which expressed doubts about the ‘Revolution’ was by Carlo Salvioli in L’Italia Scacchistica, February 1926, pages 25-29. A French translation was published on pages 49-53 of the March 1926 La Stratégie. In support of his case the writer quoted Boris Kostić in Kagans Neueste Schachnachrichten, October 1925, page 441: ‘In my opinion the term “hypermodern game” is nothing but an empty word devoid of sense.’


Frank Marshall, for his part, objected to more than just the term. As mentioned in C.N. 2877, on pages xi-xiv of his book Chess Masterpieces (New York, 1928) he discussed various proposals for ‘eliminating the so-called hypermodern style’, the latter term ostensibly meaning for him ‘the tendency on the part of many of the grand masters to adopt an extremely close style of play, which involves a keen desire on the part of both players to avoid incurring the slightest risk’. Of the solutions available, Marshall was inclined to favour balloting:

‘The balloting for openings is of course an old plan in checkers or draughts, but I do not agree with those who think that if adopted in chess matches it would sooner or later lead to a large proportion of draws. In any event it should not be a great hardship for two players to have to play White and Black alternately in selected openings, and I am certain that the public would exhibit a lively interest in a contest where they were sure to see a large number of seldom-played openings which will give a welcome variety after the monotony of the Queen’s Pawn Game.’


A well-known quip is that, firstly, the hypermodern school did not exist and that, secondly, Nimzowitsch founded it, and a number of C.N. items have tried to establish the origins of the remark. The best source available in C.N. 3079 was a vague reference in an “exclusive” article by Vidmar on pages 155-159 of the October 1927 issue of Mundial, a Uruguayan magazine published in Montevideo:

English translation: ‘... the remark of the late Teichmann, who replied to some of Réti’s statements in 1923 with his own brand of pointed humour: “First, the hypermodern school does not actually exist, and secondly it originates with Nimzowitsch”.’

‘It took Nimzowitsch 20 years of tireless preaching to achieve acceptance. So great a master as Teichmann commented dourly that “in the first place there is no Hypermodern School, and in the second place Nimzowitsch is its founder”. This was a more or less polite way of saying that Nimzowitsch was crazy.’

That last remark of Reinfeld’s seems far-fetched, and it is unclear why he affirmed that Teichmann made the remark ‘dourly’. The same C.N. item added that Reinfeld on Nimzowitsch can be a strange spectacle. For example, also on page 129 of The Chess Masters on Winning Chess he wrote: ‘By the time Nimzowitsch was 20, he had perfected his system.’ In his revised edition of Nimzowitsch’s My System (Philadelphia, 1947) Reinfeld stated (page xxi) that ‘by 1906, when he was only 20, Nimzowitsch had definitely become a master of the very first rank’.

‘Teichmann, a stalwart of the old school, made the surly comment that in the first place there was no Hypermodern school, and that in the second place Nimzowitsch was its founder.’

For a reliable account of Nimzowitsch’s development, readers today can rely on a magnificently researched book, Aron Nimzowitsch On the Road to Chess Mastery, 1886-1924 by Per Skjoldager and Jørn Erik Nielsen (Jefferson, 2012).


Peter Morris (Kallista, Australia) adds the name of Louis Paulsen. A popular account of some aspects of his contribution to chess theory is on pages 187-189 of Chernev’s The Chess Companion. Further references will be welcome.

‘It seems only a few years ago that the Hypermodern School, headed by Alekhine, Réti, Nimzowitsch, Bogoljubow and Breyer, infused a new vitality and profundity into the then extant chess theories.’

The omission of Tartakower may be considered a simple oubli.

C.N.s 2323, 4773 and 8687 discussed the nickname ‘The father of modern chess’. Concerning ‘The father of hypermodern chess’, citations for Nimzowitsch (and, even, Tartakower) are easily found, but there is also an article about Louis Paulsen by Imre König on pages 234-236 of CHESS, 19 February 1955: John Townsend (Wokingham, England) queries the statement that Staunton, after losing an informal match to Saint-Amant, ‘worked out behind closed doors, in company with very strong players like Cochrane, Popert, etc., the openings which he proposed to play in the second match’:

‘There is strong evidence that both Cochrane and Popert were abroad during the period in question. Preparation “behind closed doors” is claimed to have taken place between the two Staunton v Saint-Amant matches, i.e. between May and November 1843. However, page 2 of Bell’s Life in London, 11 September 1842 noted that Popert had already left England for his native Germany, “where, we believe, he intends remaining two or three years, in consequence of ill health”: 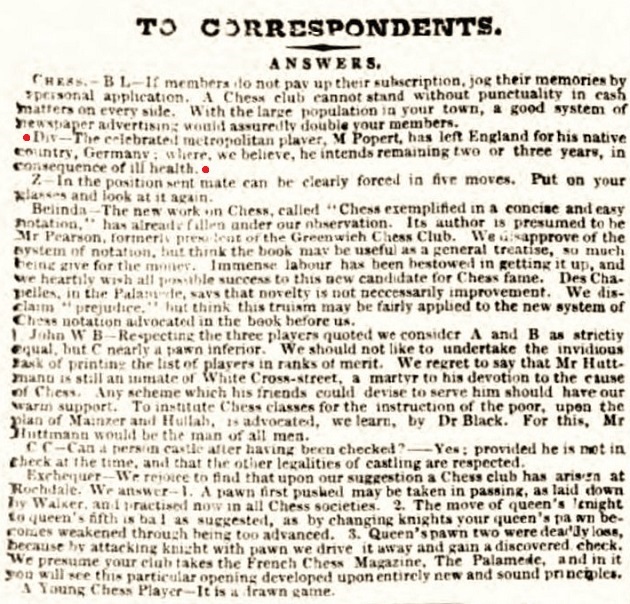 John Cochrane’s departure for India was also reported some time before the first match, in the Chess Player’s Chronicle, 1844, page 127.’

Pages 49-53 of the March 1926 edition of La Stratégie had a translation by A. Goetz of an article by Carlo Salvioli about hypermodern chess from pages 25-29 of L’Italia Scacchistica, February 1926. As shown below, the follow-up article (La Stratégie, June 1926, pages 121-122), consisted of a response submitted by Commandant H. Rey to the Marseilles newspaper Le Soleil, where the Salvioli article had also appeared in translation: 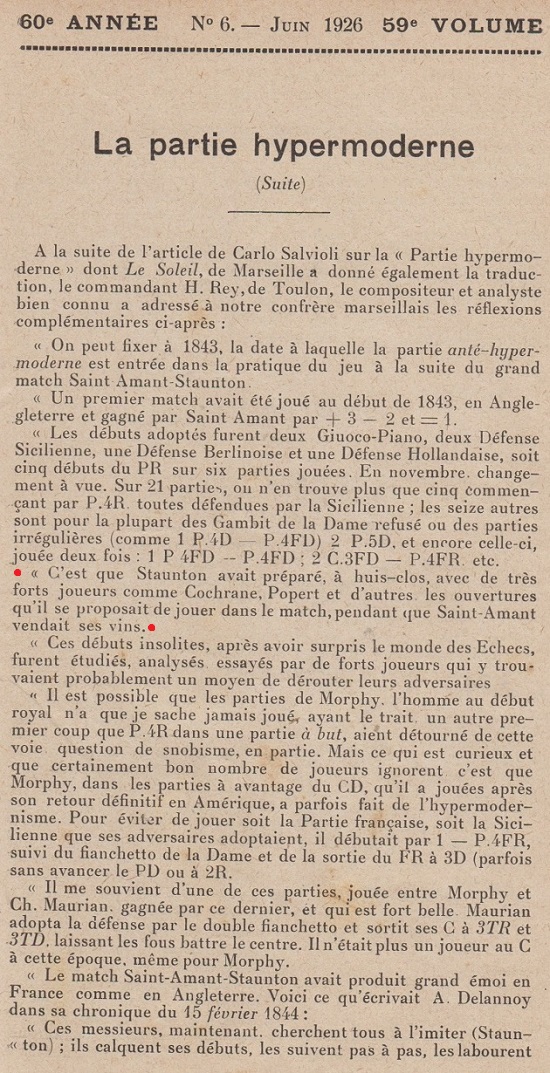 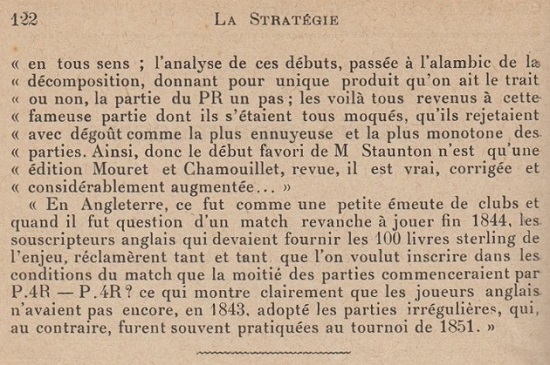