From the 2002 Bled Olympiad bulletins:

‘… In spite of my age – I am 84 – I am still very active in competitive master chess. I am only stating a matter of fact by pointing out that never before in [the] history of chess an expert of my age, or even of nearly my age, has done the same. Quite recently, however, I learned that the well-known Dutch player, Dr D. van Foreest, who, with 86 years, is two years older than I am, has by no means yet retired from active chess, being still very fond of playing off-hand games. I had met him in former times – about 30 years ago – and I remember that, then, he had the reputation of being one of the strongest players in Holland. Now he lives in The Hague and he is still considered to be “quite a good amateur”.

This gave The Royal Dutch Chess Association the happy idea of arranging a remarkable and, up to now, quite unique event, namely a serious game, played in tournament style with time limit (18 moves an hour) between two players of reputation, the combined ages of them being 170 years (!).

Here is the game with some annotations. It formed the conclusion of my exhibition in Holland.

On page 111 of Meister Mieses (Ludwigshafen, 1993) Helmut Wieteck bizarrely stated that the game had been played in ‘Kap de la Hague’ in ‘France’.

From the unpublished 1994 edition of Chess Personalia by Jeremy Gaige: C.N. 2814 (see pages 69-70 of Chess Facts and Fables) gave Mieses’ annotations to his famous victory (‘“Youth” has triumphed’) over Dirk van Foreest in the Hague on 26 March 1949. Although Mieses’ article (BCM, June 1949, pages 178-179, and shown in full in our feature article) specifically stated that his opponent was D. van Foreest, an on-line search for ‘youth has triumphed’ and ‘Arnold van Foreest’ will yield dissenting (unsourced, naturally) versions.

There is even this ‘pair’:

‘By the way, Arnold van Foreest plays a part in a well-known anecdote in which Jacques Mieses stars. In 1949, in The Hague, after Mieses (84 at the time) had won an exhibition game against Arnold (86), he caused much hilarity with the classic remark: “Youth has triumphed!”’

‘Much later Dirk van Foreest gained a place in international chess lore because of a game in The Hague in 1949 between him and Jacques Mieses. Dirk van Foreest was 86 at the time. Mieses was much younger, a mere 84. Mieses won and exclaimed happily, “Youth has triumphed!”’

‘He was the prodigy of the master tournament at Hastings, 1945-46, and his tour of Holland, Belgium, Luxemburg and Germany, where he gave simultaneous displays in 1949, at the age of 84, is unique in the history of chess.’

Page 12 of the January 1949 BCM reported, on the basis of a letter received from Mieses, that he had just given 15 simultaneous exhibitions in Sweden. In an article on pages 178-179 of the June 1949 BCM Mieses wrote:

‘From the middle of February till the end of March I was engaged in a chess tour of Holland, Belgium and Luxemburg. That Holland and Belgium are countries where chess life is highly flourishing is a very well-known fact and, thus, I was not surprised that in Amsterdam, The Hague, Brussels, Antwerp, Louvain, Verviers, Charleroi they put up against me, in simultaneous exhibitions, rather strong teams of, on average, more than 20 players. But what I had not expected was that in Luxemburg I should have to give three simultaneous displays – each of them against about 25 opponents – on three consecutive days. Apart from the simultaneous displays I played, in Holland, repeatedly four serious simultaneous games against first-class amateurs. In all these exhibitions my achievements have been quite satisfactory.’

Can readers trace any forgotten games from these tours by Mieses?


What are the origins of the famous ‘Mister Meises/Meister Mieses’ story? On page 182 of CHESS, 20 March 1960 B.H. Wood wrote, ‘This anecdote first appeared in print in CHESS many years ago’.


Peter Anderberg (Harmstorf, Germany) points out that the story was published on pages 169-170 of Schachwart, September 1932, as follows:

Our correspondent comments that this report pre-dates B.H. Wood’s magazine CHESS, which was first published in 1935. The reference to a well-known English (sic) amateur named Judd is strange.

Assiac set the story not in England but in New York when relating it on page 186 of The Delights of Chess (London, 1960):

‘One day in New York he was asked by a German-American who mispronounced his name the English way: “Sind Sie Mister Meises?” “No, sir”, he answered like a shot, “Ich bin Meister Mieses.”

The old boy was full of such anecdotes and reminiscences when he was in a good mood.’


In an article on pages 406-408 of the September 1976 BCM D.J. Morgan related that in 1938 (late June) he learned from James Gilchrist of Jacques Mieses’ arrival in England (‘he has made a hurried escape from Nazi Germany’). Morgan resumed his old acquaintance with Mieses the next day and noted that ‘in his flight he had brought little with him except his wonderful chess endowments’. Morgan added:

‘The afternoon and evening glowed with chess memories and demonstrations. In particular, he spoke with endearing words of the great Carl Schlechter, and played from memory the game which he won as Black from Carl at St Petersburg, 1909, a feature of which was the unusual activity of Black’s queen. But his favourite among his own games was the one he won from Janowsky at Paris, 1900.’

‘My Most Exciting Game’ was the title of an article by Mieses on pages 280-281 of CHESS, 14 April 1939. He selected his win over Curt von Bardeleben at Barmen, 1905 – ‘it holds as much interest and excitement as I would ever wish to experience’. Mieses added that ‘Curt von Bardeleben at his best was one of the strongest players of all time’. 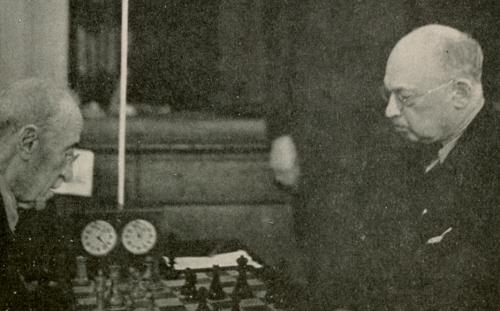 This photograph of Mieses in play against Tartakower at Hastings, 1945-46 was published on page 7 of the January 1946 Chess Review.


Wanted: more details about a game whose finish was published on page 51 of Instructive Positions from Master Chess by Jacques Mieses (London, 1938):

Some other sources – such as pages 44-45 of the fifth edition of Kombinationen by Kurt Richter (Berlin, 1978) – state that the game occurred around 1906. 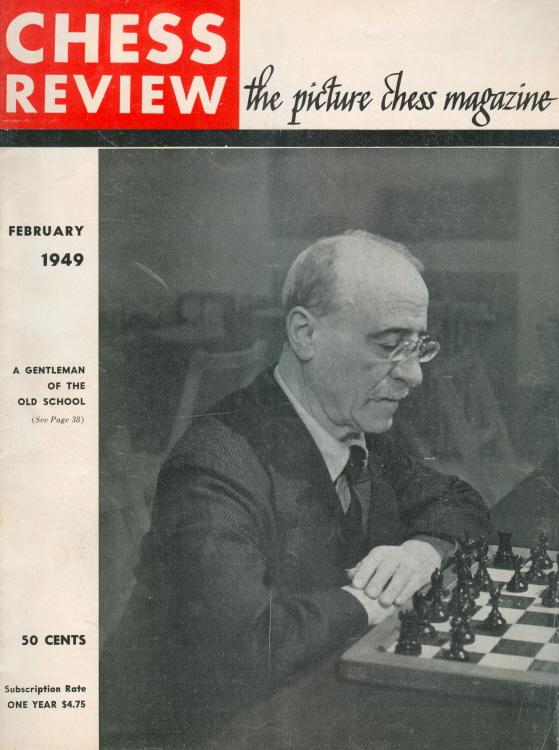