Three games involving the little-known player Soldatenkov were given in 1000 Best Short Games of Chess by I. Chernev (New York, 1955): victories against an anonymous player and F.J. Marshall (in 17 and 21 moves respectively and both published on page 433 of the November 1928 BCM) and The Consultation Game That Never Was. Another brilliancy is on pages 43-44 of Kings, Commoners and Knaves:

When we published this game in the BCM in 1975 we commented:

How famous would the following game have become had it been played by Morphy?


Below are some further neglected games:

From page 224 of the American Chess Bulletin, November 1917 (an item headed ‘Ending between Russian Diplomats’):

A computer check shows that White missed a number of faster wins.

Soldatenkov’s name became associated with 1 e4 e5 2 f4 Bc5 3 Nf3 d6 4 fxe5 (the ‘Soldatenkov Attack’ or ‘Soldatenkov Variation’) after the following appeared on page 124 of the Carlsbad, 1907 tournament book by Marco and Schlechter:

A number of Soldatenkov’s early games in Russia, together with much other material, were given in a small monograph on him, Tajemný Námořník by V. Čarušin (Brno, 1998). The New York Times (15 October 1917, page 16) reported that a Marshall/Soldatenkov v Janowsky/Jaffe consultation game had just begun (‘The contest will probably extend over the greater part of the week. Marshall and Soldatenkov, playing the white pieces, elected a queen’s pawn opening, to which the rival pair replied with knight to king’s bishop third.’). Further information would be welcome. Page 210 of the December 1921 American Chess Bulletin gave the score of an 18-move draw by Soldatenkov against Perkins which was played in a Metropolitan League match between the Marshall Chess Club and the Brooklyn Chess Club. A loss by Soldatenkov to Zirn in the Metropolitan Chess League was published on page 25 of the February 1922 American Chess Bulletin. More details are sought about the game ending ‘Soldatenkov-Wolf, Berlin, 1925’ given on pages 119-120 of The Joys of Chess by F. Reinfeld (New York, 1961). Soldatenkov’s 21-move victory over Marshall referred to at the beginning of the present item was published by H. Wolf on pages 300-301 of the September-October 1928 issue of Kagans Neueste Schachnachrichten. Clarification of the circumstances of the game, together with notes by Soldatenkov himself, appeared on pages 197-200 of the June 1929 issue. A lengthy article by Soldatenkov was published on pages 221-226 of the July 1929 Kagans Neueste Schachnachrichten. It discussed a recent victory over A. Zimine in the light of a Bogoljubow v Euwe game (the seventh contest in their second match, played in Amsterdam on 2 January 1929 – see pages 53-54 of the February 1929 Wiener Schachzeitung).

Below is page 109 of the revised edition of Mitchell’s Guide to the Game of Chess by David A. Mitchell (Philadelphia, 1920):

Soldatenkov also has a bearing on the origins of the Marshall Gambit in the Ruy López. At New York, 1918 Marshall played 8...d5 twice, against Capablanca and Morrison. Regarding the latter game it was pointed out on page 276 of the December 1918 American Chess Bulletin (under the heading ‘Duplication of Game after 17 Years’) and on page 21 of the tournament book that a game Sittenfeld v Soldatenkov, Paris, 1901 had followed Morrison v Marshall as far as move 18 (when Soldatenkov played ...Bd6 instead of ...gxf6). Whereas Marshall’s victory took 84 moves, Soldatenkov won in 25.

Without reference to these American sources, the Sittenfeld v Soldatenkov game was given by Kevin O’Connell on page 186 of the April 1980 BCM (in K. Whyld’s ‘Quotes & Queries’ column). It was stated that O’Connell had found the game in La Stratégie for 1901, but we do not see it there.

On pages 314-315 of the July 1987 BCM we quoted from, and commented on, the above-mentioned American Chess Bulletin item. Page 612 of the November 1999 BCM (also in the ‘Quotes & Queries’ column) referred to the difficulty in finding biographical information about Soldatenkov (whose birth details were given as 14 July 1879 at Tsarskoye Selo – as mentioned on page 3 of the booklet on Soldatenkov by Čarušin/Charushin).

The lack of information about Soldatenkov (e.g. where and when he died) is particularly strange in view of his prominence as a diplomat on both sides of the Atlantic. A lengthy political article on page 12 of the New York Times, 20 October 1918 included the following:

‘Basil Soldatenkov, standing six feet in his socks and as hard as nails, his deep-set gray eyes looking you straight through from beneath the ledge of a massive brow crowned with waving light brown hair, is a comparatively young man to have had the experiences and to have shouldered the responsibilities which have been his.

He is, perhaps, five and thirty, and by natural mental inclination a mathematician and electrical engineer. On leaving the university, it was his intention to make scientific research his life work, but circumstances led him, first, to try for and win a commission in the Russian navy, and later to enter the Russian Diplomatic Corps.

Mr Soldatenkov served the Imperial Russian Government in nearly every capital of Europe. There are few men living who have as intimate a personal acquaintance with the great diplomats of the world. He came to this country on a special mission from the Kerensky Government.’

It will be noted that his forename was given as ‘Basil’, i.e. the anglicized version of Vassily. However, page 63 of the March 1918 American Chess Bulletin referred to ‘Boris Soldatenkoff, the Russian envoy’. Because of German transliteration, the initial of his forename was sometimes recorded as W (‘Wassily’). The index for the 1907 volume of Deutsches Wochenschach (page 483) had ‘Soldatenkow, W.W. (St Petersburg)’.

‘Mr and Mrs Basil Soldatenkov yesterday surprised their relatives and friends by announcing they had been married in Newark, NJ on Tuesday. Mrs Soldatenkov was formerly Miss Madeleine Reese, niece of Martin Vogel, Assistant United States Treasurer, and Mrs Vogel, with whom she had resided since the death of her mother six years ago.

Mr Soldatenkov, who was a special envoy of the provisional Government of Russia, had been attentive to Miss Reese for some time, but Mr and Mrs Vogel withheld their consent to the marriage, owing chiefly to the disparity of their ages, their niece being only 20 years of age and Mr Soldatenkov about 17 years her senior ...

Mr Soldatenkov has been married before. His first wife was the Princess Gotchakoff of Russia, from whom he was divorced last November.

Mr Soldatenkov was Under Secretary of State in Russia under the Milyoukof régime. He met and took charge of Elihu Root and the American Mission when it arrived in Russia, and returned here with the Mission. On his arrival he was thanked personally by President Wilson and Mr Root and was presented with a cigarette case bearing an inscription in acknowledgement of his services to the American Mission.’

The above two references to Soldatenkov in the New York Times suggest that he was born in or around 1883. It was subsequently reported by the newspaper (21 December 1928, page 13, and 11 October 1933, page 27) that the couple were divorced in Nice in October 1928. On 10 October 1933 the marriage took place in London between Madeleine Soldatenkov and ‘Baron Constantine Nicolai Stackelberg, whose father, Baron Nicolai Stackelberg, was a master of ceremonies at the court of the late Czar Nicholas of Russia’.

The Family Search website produces the information that ‘Vasilij Vassilievich Soldatenkov’ was born circa 1869 in ‘Tachanj, Pltv, Ukraine’ and that he married ‘Elena Konstantinovna, Princess Gorchakov’ on 20 January 1901. However, there is also an entry for ‘Basil Soldatenkow’, born in Moscow on 14 June 1877.

The search for biographical details about Soldatenkov continues, and for the time being we conclude with a quiz question arising from one of his early games:

White to move. What is the fastest win?

We have found a passage about Soldatenkov on page 99 of Self Portrait by Man Ray (Boston and Toronto, 1963). Elsa Schiaparelli has just been mentioned. 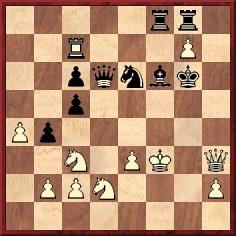 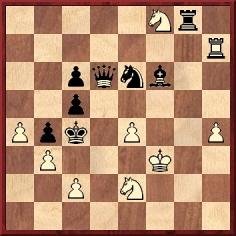 However, it was also pointed out by La Stratégie that two correspondents (Guinet and Buckley) had offered a quicker finish (4 Nde4+ Kf5 5 Nxd6+ Ke5 6 Nf7+ Kf5 7 e4 mate).

When the initial position was given on page 16 of the Czech edition of V. Charushin’s booklet on Soldatenkov (the source being specified as Shakhmatny Zhurnal, 1897, page 357) Black had two additional pieces: a knight on b7 and a bishop on c4. There is then no mate in seven, and the fastest mate is the above line ending in 8 b3.

Vitaliy Yurchenko (Uhta, Komi, Russian Federation) supplies the text in the Russian edition of the monograph on Soldatenkov by V. Charushin (Omsk, 2000): 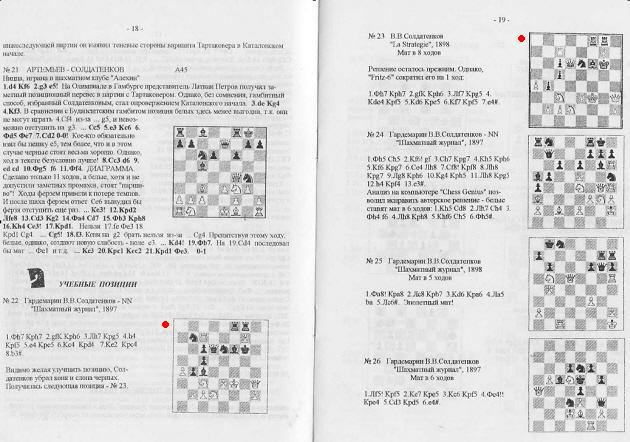 Soldatenkov also has a bearing on the origins of the Marshall Gambit in the Ruy López. At New York, 1918 Marshall played 8...d5 twice, against Capablanca and Morrison. Regarding the latter game it was pointed out on page 276 of the December 1918 American Chess Bulletin (under the heading ‘Duplication of Game after 17 Years’) and on page 21 of the tournament book that a game Sittenfeld v Soldatenkov, Paris, 1901 had followed Morrison v Marshall as far as move 18 (when Soldatenkov played ...Bd6 instead of ...gxf6). Whereas Marshall’s victory took 84 moves, Soldatenkov won in 25.

Tony Gillam (Nottingham, England) notes that the Sittenfeld v Soldatenkov game had been published too in the Brooklyn Daily Eagle, 22 November 1918, Section 1, page 2:

The New York Times (15 October 1917, page 16) reported that a Marshall/Soldatenkov v Janowsky/Jaffe consultation game had just begun (‘The contest will probably extend over the greater part of the week. Marshall and Soldatenkov, playing the white pieces, elected a queen’s pawn opening, to which the rival pair replied with knight to king’s bishop third.’). Further information would be welcome.

Dr Hilbert provides the following from page 15 of the Washington Evening Star, 22 October 1917:

Whether the game was ever resumed has not been ascertained.

C.N. 6183 also mentioned that page 25 of the February 1922 American Chess Bulletin published a loss by Soldatenkov to Zirn in the Metropolitan Chess League. John Hilbert adds that the score had appeared on page A3 of the Brooklyn Daily Eagle, 23 February 1922:

That was the conclusion of a game won by Soldatenkov against C.P. Weeks which has been found by Eduardo Bauzá Mercére (New York, NY, USA) in the Brooklyn Daily Eagle, 24 March 1921, Section 1, page 3:


Olimpiu G. Urcan (Singapore) draws attention to a photograph on the webpage of the New York Public Library. The same picture is on a webpage drawn to our attention by Tony Gillam (Nottingham, England), which has the additional statement that Soldatenkov died in Rome on 31 July 1944 (see too the information on a webpage by Denis Orlov).

‘Pages 80-85 of the 12/2018 issue of 64 – Шахматное обозрение have a detailed, illustrated article about V. Soldatenkov by Stanislav Sukhanitsky of Lubny, Ukraine.’