The 1922 international tournament in London was won by Capablanca ahead of Alekhine, Vidmar and Rubinstein. The Cuban’s round-by-round reports in The Times were reproduced on pages 139-151 of our 1989 monograph on the Cuban. See also Capablanca on London, 1922.

The location was the Central Hall, Westminster:

The picture below appeared opposite page 216 of Glorias del Tablero “Capablanca” by José A. Gelabert (Havana, 1923): 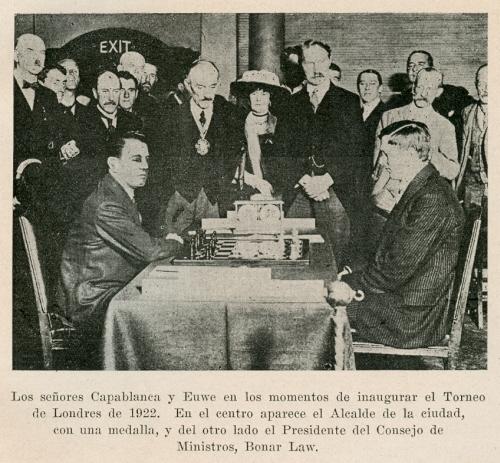 If chess literature is to feature anecdotes, let them at least have a point. One story, set during the London, 1922 tournament, which has some purpose was related by David Hooper in the Capablanca entry of Anne Sunnucks’ Encyclopaedia of Chess:

‘These two rivals [Capablanca and Alekhine] were taken to a variety show by a patron, Mr Ogle, who recalled that Capablanca never took his eyes off the chorus, whilst Alekhine never looked up from his pocket chess set.’

In the first edition of The Oxford Companion to Chess (the Alekhine entry) the patron was named in full as Christopher Ogle, and in at least one other modern outlet he has been described as a ‘chess patron’. That remains to be demonstrated, but our particular interest is in knowing the source of the Ogle/ogling recollection and whether there are further reminiscences from London, 1922. This advertisement is on an inside cover page of the October 1956 BCM. Does any reader have a copy of the Hollings catalogue? 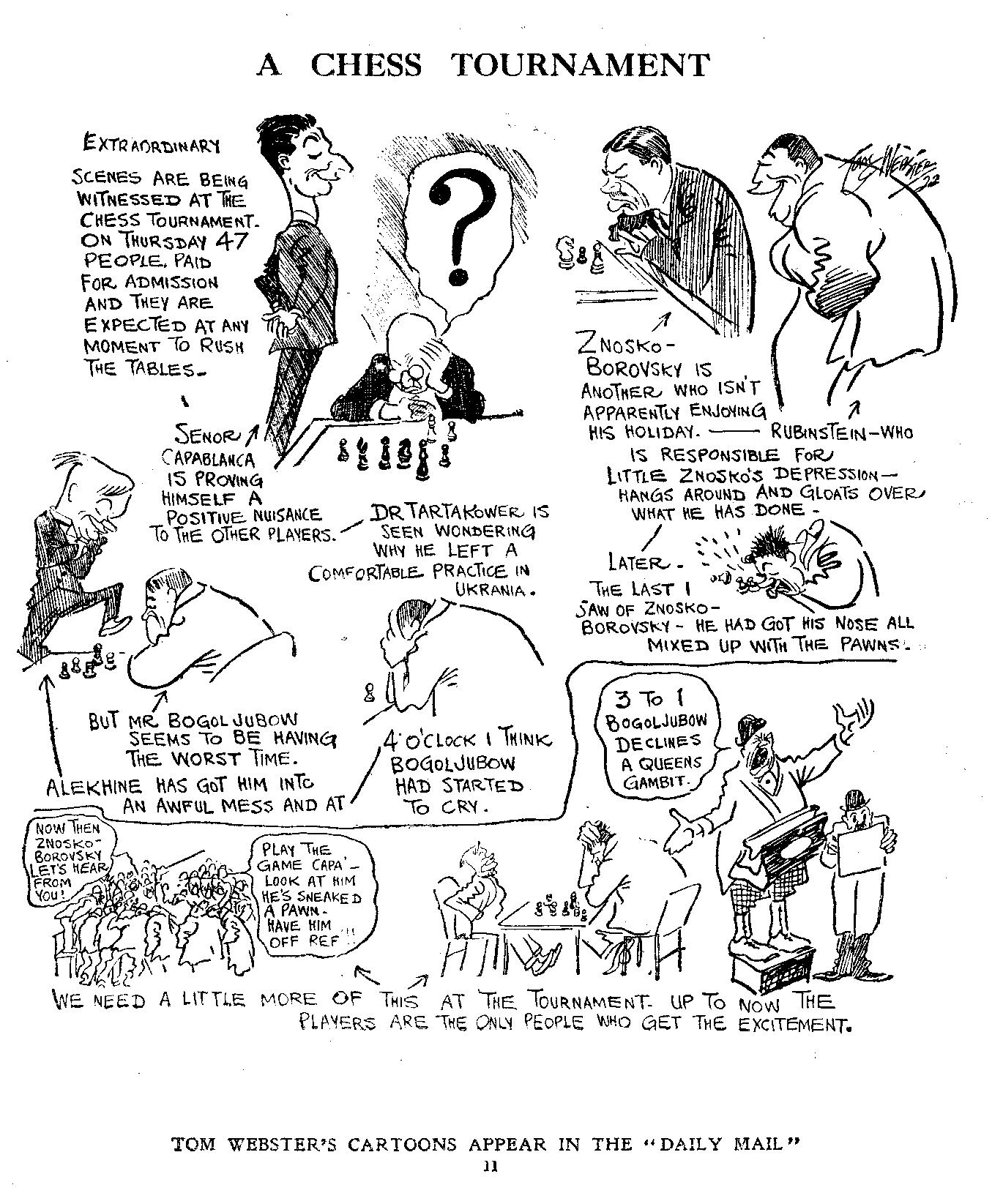 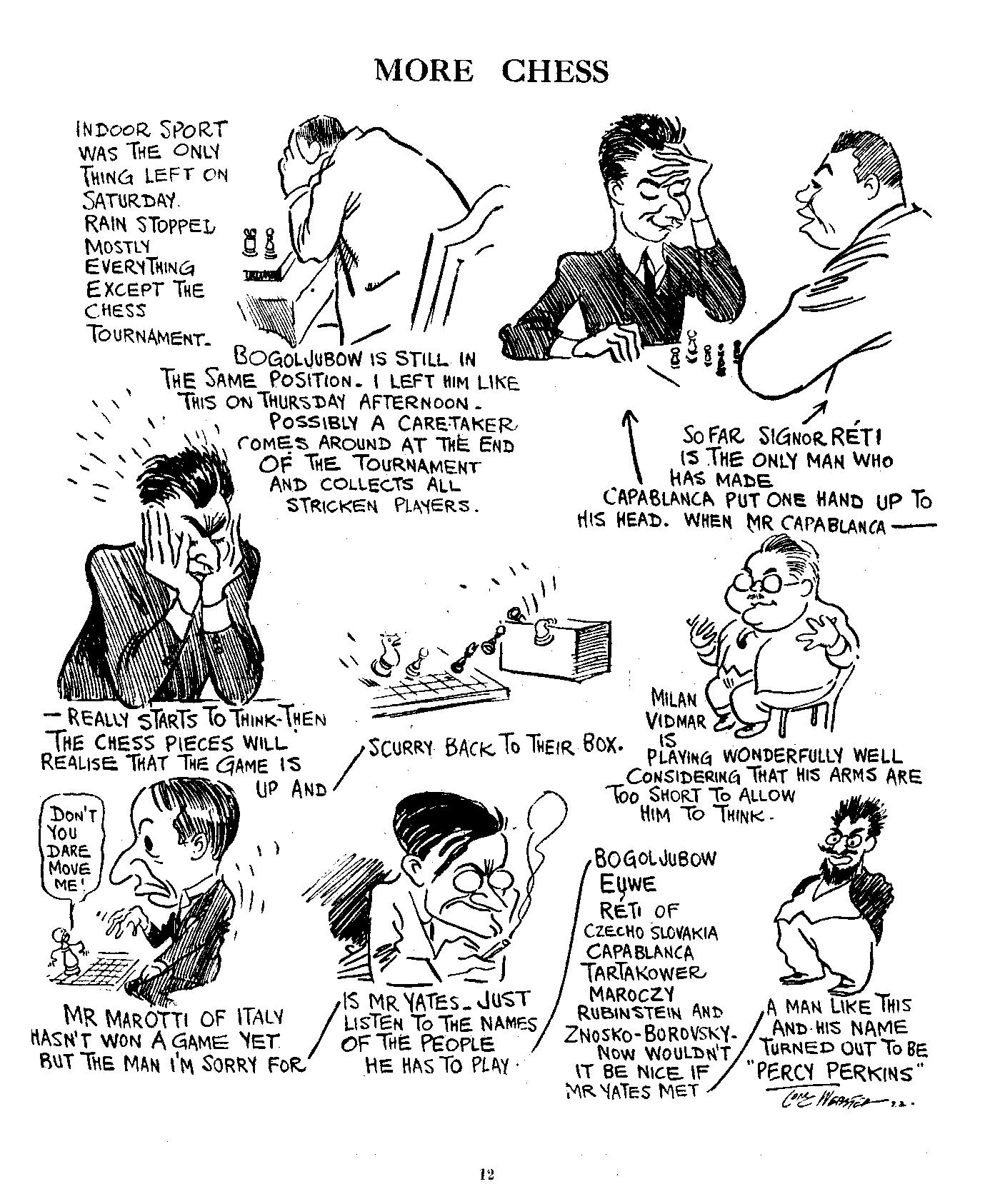 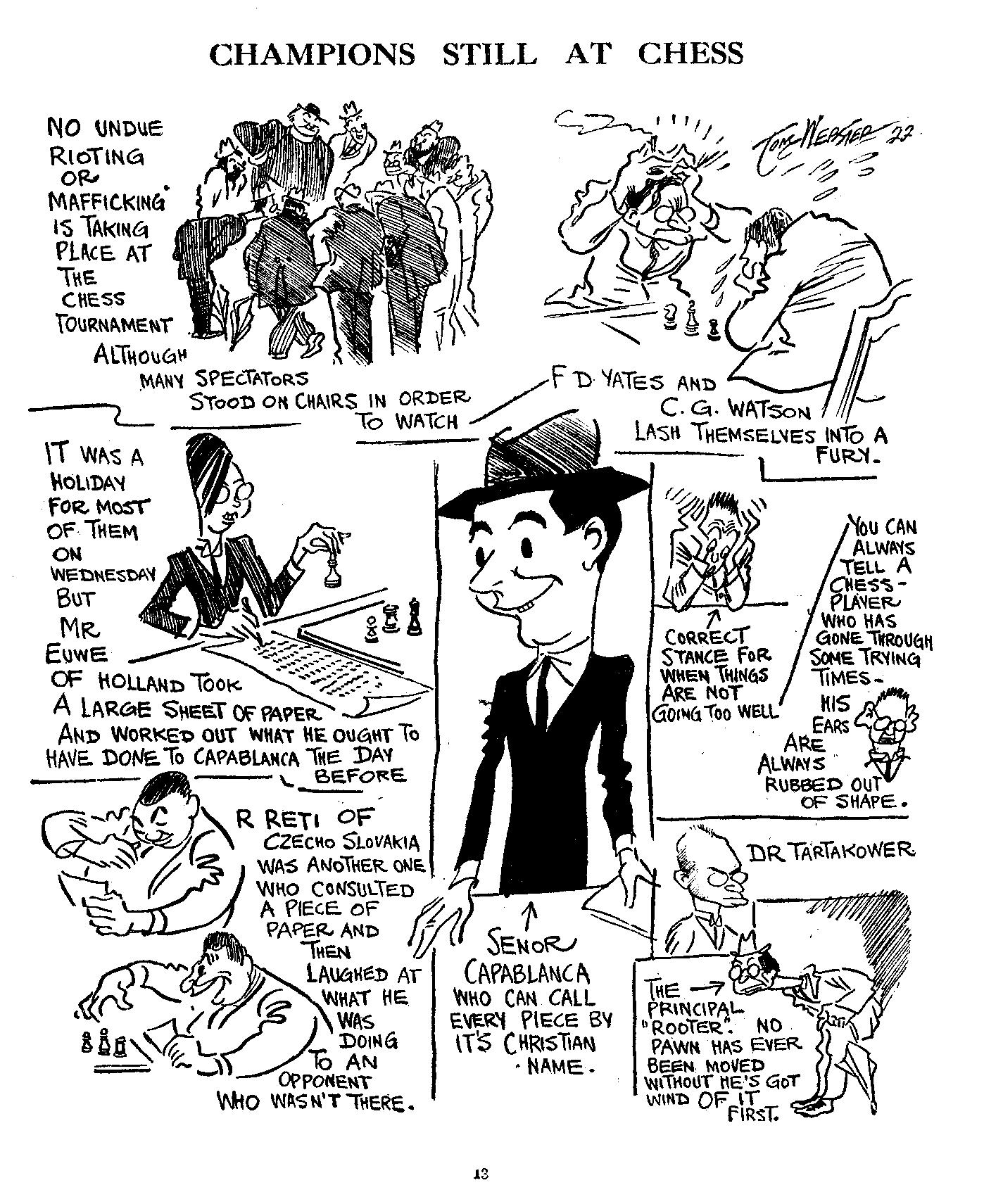 He adds that this detail from the 14 August cartoon was published on page 9 of the Daily Mail, 19 August 1922: 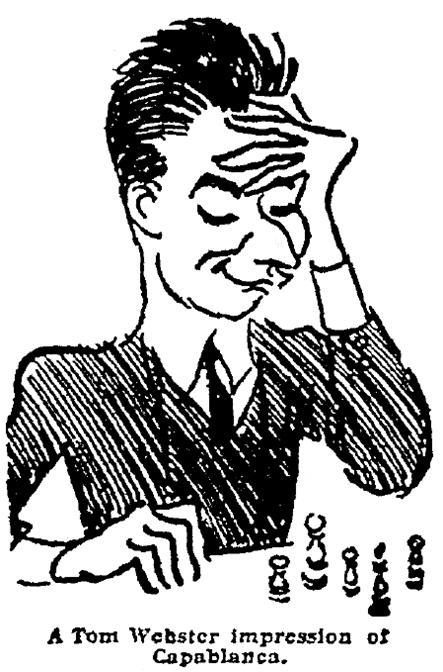 
It is surprising that Julius du Mont, who knew the Cuban quite well, made so many factual errors in his memoir in Capablanca’s Hundred Best Games of Chess by H. Golombek (London, 1947). A list compiled by us was made available in C.N. 3767, and here we revert to a puzzling case concerning Capablanca and Vidmar. As is well known, on page 17 du Mont wrote about Capablanca:

‘I remember his winning a brilliant game from Dr Vidmar in London, 1922, and laughingly patting the loser on the back, saying: “He always give [sic] me a chance of a brilliancy: he is my meat” – this accompanied by such a charming and good-natured smile that everyone, including Dr Vidmar, had the impression that he had bestowed the finest compliment on his opponent. Who else could make such a remark to his adversary and convey the feeling of the utmost friendliness?’

We quoted this on pages 317-318 of our book on Capablanca and commented:

‘The story cannot be correct, as before London, 1922 Capablanca and Vidmar had met only once, drawing in 20 moves.’

Below is one of many photographs provided by Gerard Killoran (Ilkley, England) in C.N. 10362, showing Capablanca in play against Vidmar (not Rubinstein): 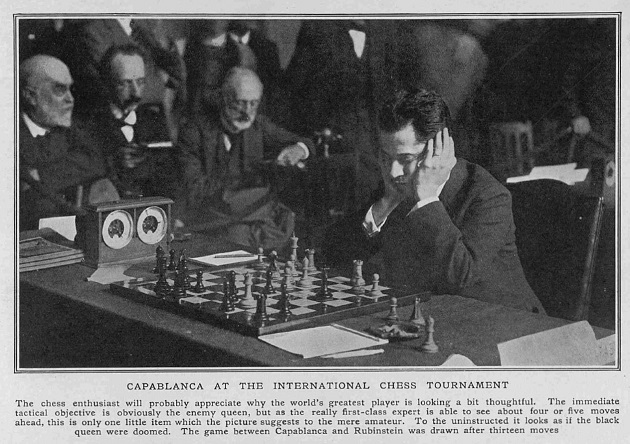 
A common piece of chess ‘wisdom’ is that good moves are pleasing on the eye, but when was this view first expressed? We note that it appeared on page 445 of Tarrasch’s Das Schachspiel (Berlin, 1931), concerning White’s opening play in Alekhine v Yates, London, 1922:

The English edition (page 359 of The Game of Chess) stated:

It is not always clear who should be regarded as a hypermodern player. C.N. 653 mentioned the case of Efim Bogoljubow, pointing out that on page 106 of The Immortal Games of Capablanca (New York, 1942) Reinfeld described Capablanca v Bogoljubow, London, 1922 as the Cuban’s ‘first encounter with an outstanding Hypermodern master’. However, we added that a random check of tournament books of some of Bogoljubow’s greatest triumphs in the 1920s indicated that his opening play was extremely classical, with barely an Indian Defence, Réti Opening, etc. in sight. 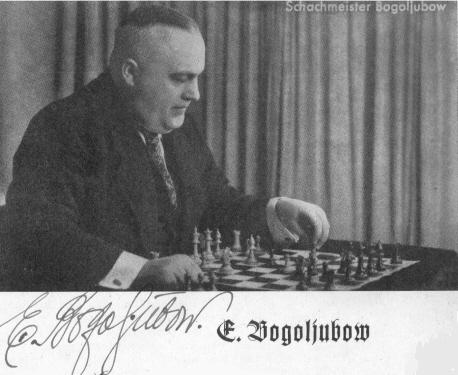 A serious disservice is done to chess history by some ‘modern’ editions of old tournament books. The latest example is London 1922 by G. Maróczy (Milford, 2010), which not only discards the original book’s introductory material but brushes out the editor and publisher, W.H. Watts, and a master, Amos Burn, who annotated at least 18 of the games.

In the original edition, games featuring Burn’s annotations (games 41-44, for example) ended with the specific reference ‘Notes from The Field’: 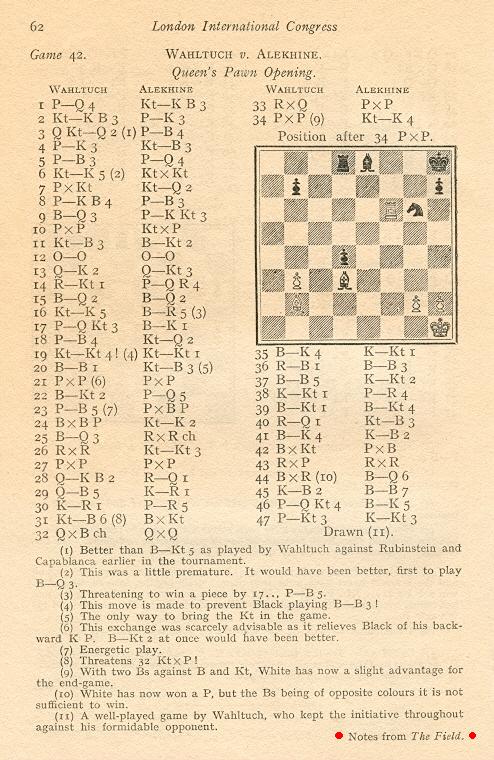 On page 5 of the original edition Watts gave an explanation indicating that the total number of games annotated by Burn, as opposed to Maróczy, might well be even higher than 18: 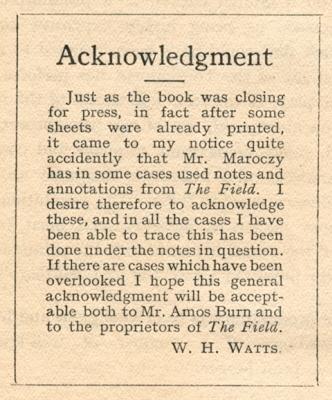 From Gaffes by Chess Publishers and Authors:

Sometimes a publisher offers variety. International Chess Congress, London 1922 edited by David Regis (Aylesbeare, 2006) had E.R. Tinsley on the front cover, E.H. Tinsley on the title page and (accuracy at last) E.S. Tinsley in the Foreword.


A paragraph about Euwe by Walter Meiden on page 21 of the April 1982 Chess Life:

‘He was modest and unassuming; he tried to look at things from an unbiased point of view. He insisted on including in The Road to Chess Mastery, which had only master vs amateur games, one that he had lost to Capablanca – Game 7. “I played like an amateur in that game”, he said, and he showed in his marvelously clear way just how Capablanca won.’


Below is an example of Franz Gutmayer’s output, from pages 20-21 of his book Der fertige Schach-Praktiker (Leipzig, 1923): 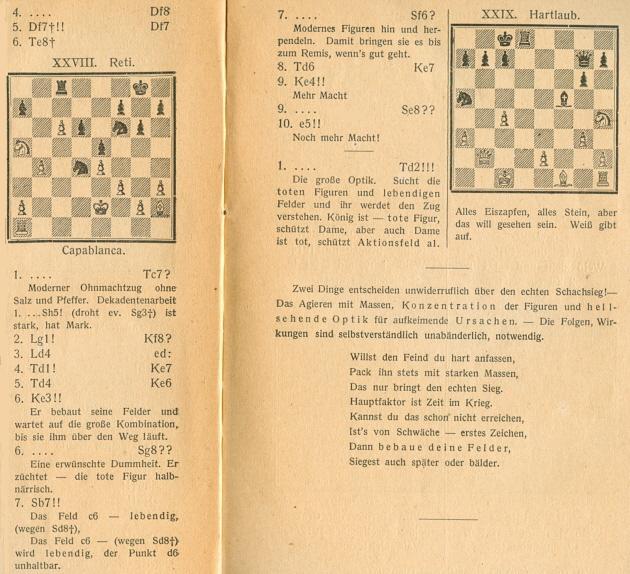 In the Capablanca v Réti game (London, 1922) neither player overlooked that the Cuban’s king was in check. It was on e1, and the white rook was on c1, not a1. Black had a pawn on b5.


Gerard Killoran provides a set of caricatures on page 261 of The Graphic, 19 August 1922: 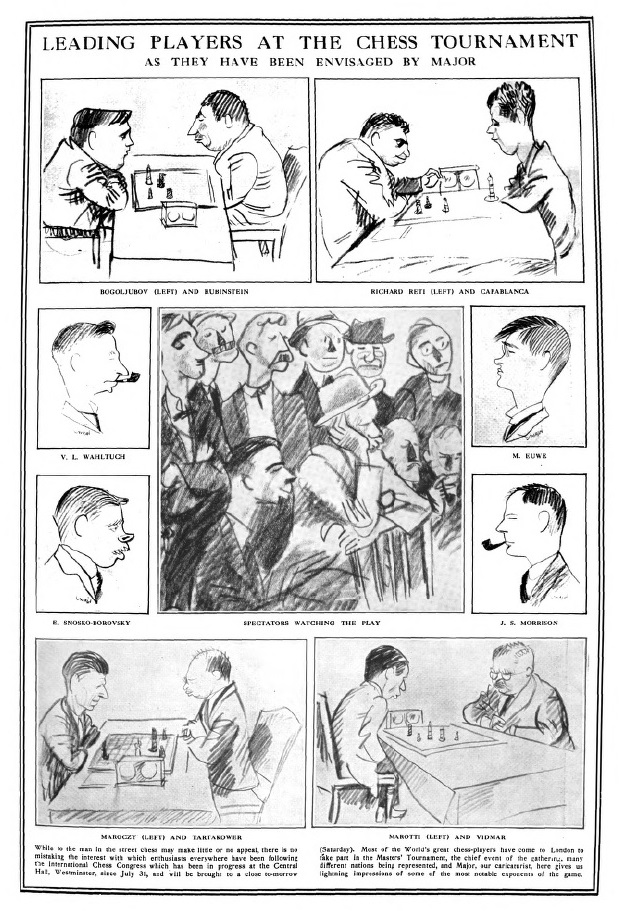 
Ivor Goodman (Stevenage, England) asks about the move order in Tartakower v Atkins, London, 1922. He points out that after 34 Kc2 ... 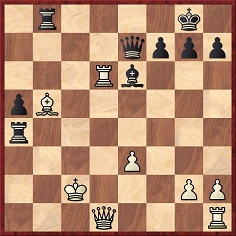 The game was widely published at the time, e.g. in the BCM, Chess Amateur and (with Brian Harley’s notes from page 4 of the Observer, 13 August 1922) American Chess Bulletin. It is in the London, 1922 tournament book by Maróczy with Amos Burn’s annotations from The Field, and it was later anthologized in A Treasury of British Chess Masterpieces by F. Reinfeld (London, 1950) and 500 Master Games of Chess by S. Tartakower and J. du Mont (London, 1952). In all of these publications the move order was 34...Ra2+ 35 Kc3 Rc8+ 36 Bc6 Rxc6+ 37 Rxc6 Qb4+.

Capablanca did not mention the game in his report on the ninth round of the London tournament on page 14 of The Times, 12 August 1922, but the same page had this paragraph ‘by our chess correspondent’:

‘The game between Tartakower and Atkins was the first example of this opening in the tournament, Atkins playing the KtxP variation on his fourth move. The middlegame was even. Tartakower castled on the queen’s side with a view to a king’s-side attack. Mr Atkins countered by an attack on the queen’s side, but again got short of time. However, he seemed to play all the better for it, for with only about 14 minutes to make as many moves he drove Tartakower’s king all over the board by a series of checks, and finally mated him on the 42nd move.’

As noted in The Best Chess Games, Tartakower wrote on pages 241-244 of CHESS, 14 March 1939 that his draw against Capablanca at London, 1922 was ‘the most terribly pulse-stirring flight [sic] of my whole chess career’.


The feature article Chess Pictures in The Sphere includes the following, provided by Olimpiu G. Urcan: 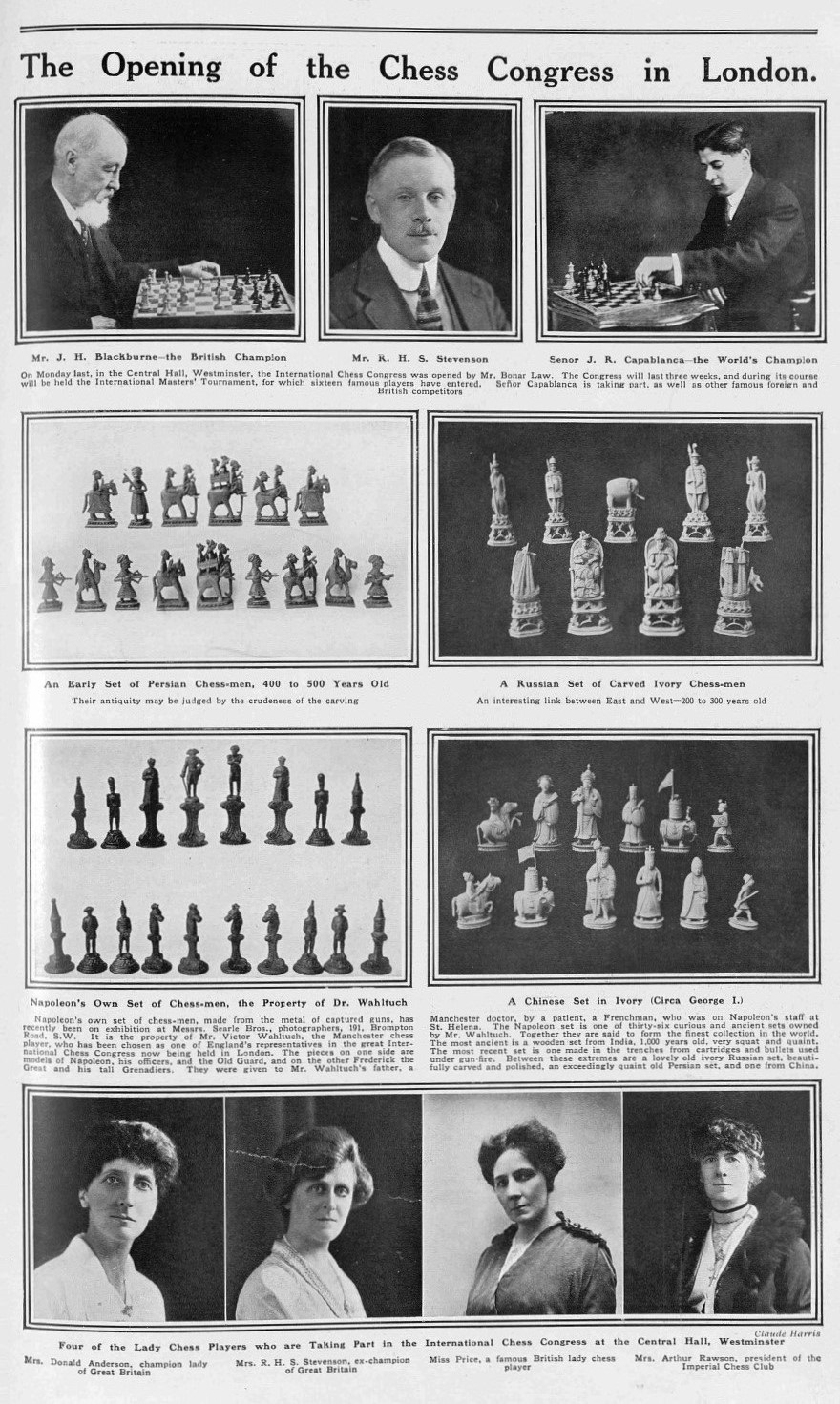 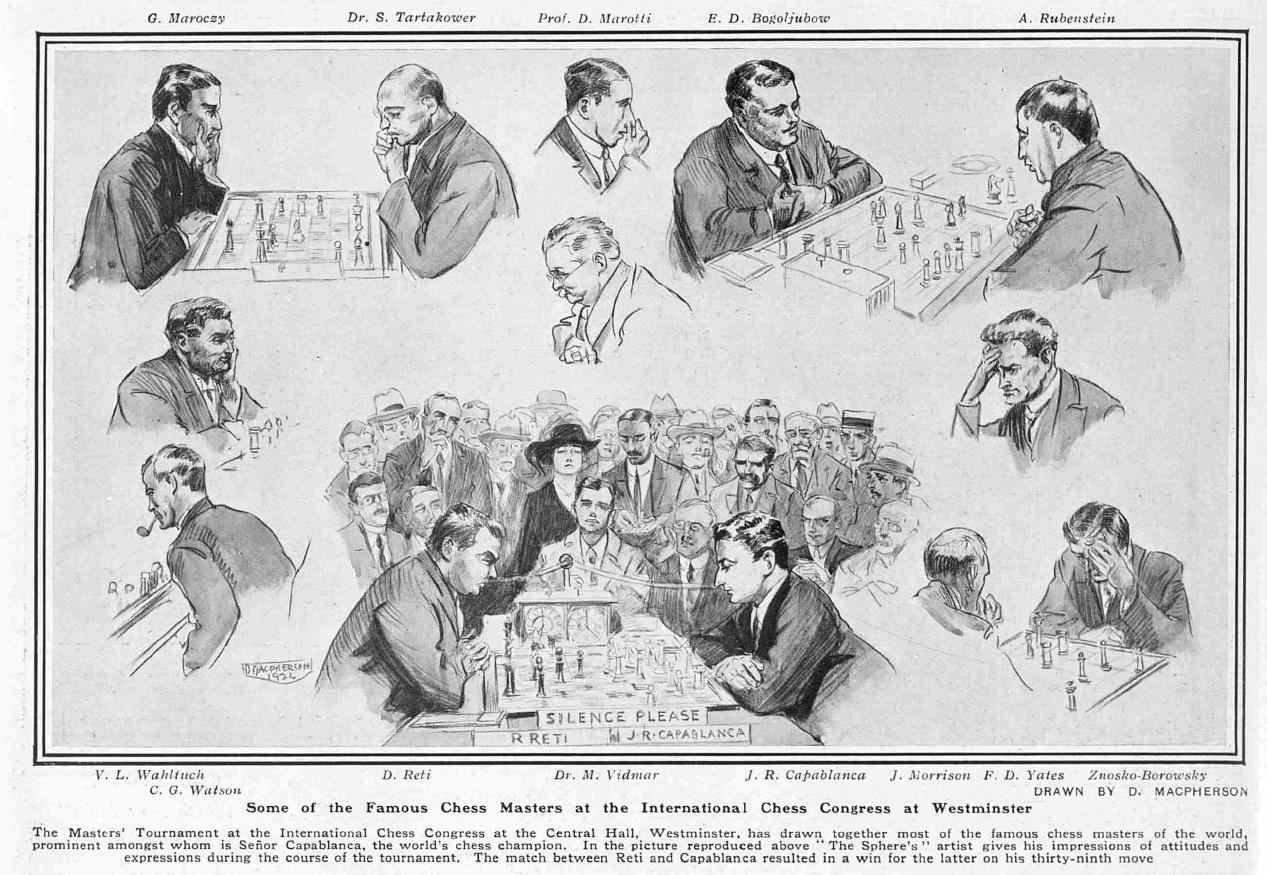 ‘Then Watson went to London. It meant crashing into a field which included Capablanca, Alekhine, Vidmar, Rubinstein, Bogoljubow, Réti, Tartakower, Maróczy, Euwe and Co. It’s our firm belief that Watson, bred in the same environment as any of these, would have become a grandmaster himself  – but when one considers that before this event he had competed in only one round-a-day tournament in his life, and in his whole 42 years had barely that number of match games against players of his own strength, his score of 4½ out of 15 in that field emerges as something of a miracle. It included four outright wins, the same number that was achieved by Euwe and Znosko-Borovsky. He scored 1½ out of 2 against Britain’s two greatest players, Yates and Atkins, and defeated Réti. He also made a great fight against Vidmar (winner of third prize below Capablanca and Alekhine) and, under time-pressure, missed a forced win against Maróczy.’


Can an authoritative explanation be found, or put together, concerning Emanuel Lasker’s absence from London, 1922?


Plans to hold an international tournament in London were reported on page 12 of The Times, 19 September 1921: 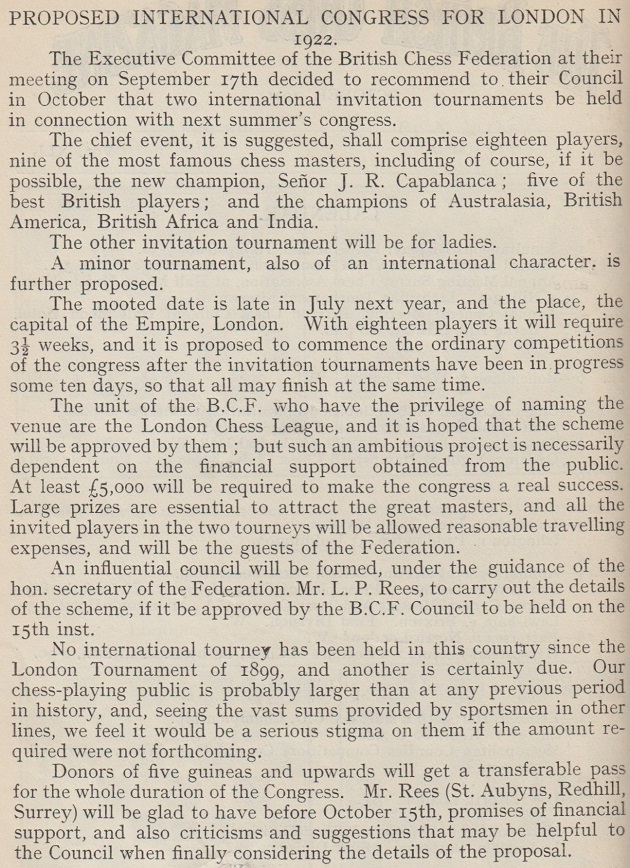 A tentative list of participants was published on page 195 of the Chess Amateur, April 1922: 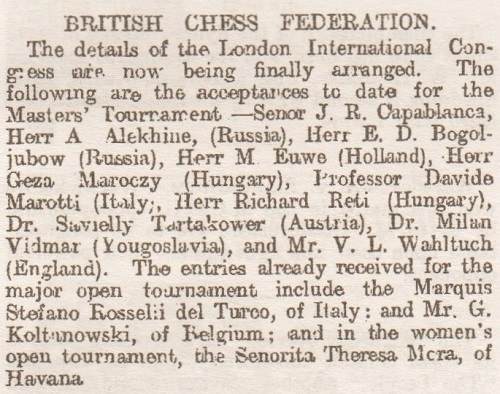 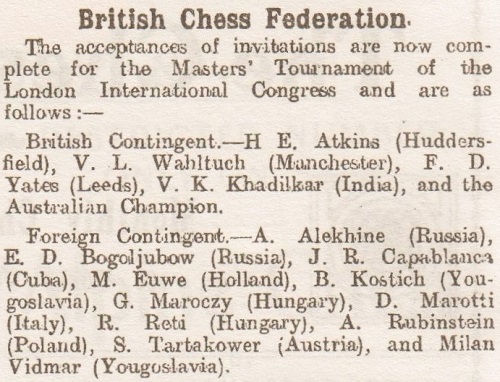 Neither V.K. Khadilkar nor B. Kostić participated. Regarding the former, page 14 of The Times, 31 July 1922 reported:

‘Znosko-Borovsky takes the place of the Indian Champion, V. Khadilkar, who found himself unable to make the journey to England.’ 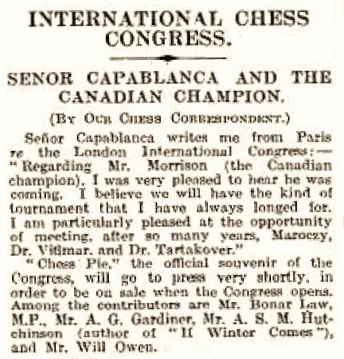 Most British reporters wrote about the tournament as if German chess did not exist, although two BCM issues in 1922 carried reports in the ‘Colonial and Foreign News’ section, under the heading ‘Germany’, about Lasker’s non-participation in London, 1922:

‘In connection with the proposed quadrangular tournament in Hastings between Capablanca, Lasker, Alekhine and Rubinstein, the Deutsches Wochenschach remarks that in Hastings they appear to be more open-minded than in Chauvinistic London! The DW does not propose to report the London tournament.’

‘The Deutsches Wochenschach has reconsidered its decision not to report the London Congress, influenced by the fact of the invitation of Dr Lasker to Hastings, which, our contemporary says, shows that the exclusion of German masters from the London Congress is a mistake for which the whole of England must not be held responsible.’

It will be borne in mind that after Lasker wrote a series of nationalistic/patriotic/jingoistic articles about the Great War in the Vossische Zeitung from 16 August to 25 October 1914, he was strongly criticized in England, and especially in the Chess Amateur. See C.N. 3272, reproduced on page 211 of Chess Facts and Fables.

Pages 277-279 of the April-June 1927 Kagans Neueste Schachnachrichten reproduced a statement by Lasker from the Essener Zeitung of 21 December 1926. His explanation as to why he would not be participating in New York, 1927 included the following about his absence from London, 1922 (and Hastings, 1922):

Another version of such remarks by Lasker was given on page 195 of our book on Capablanca. 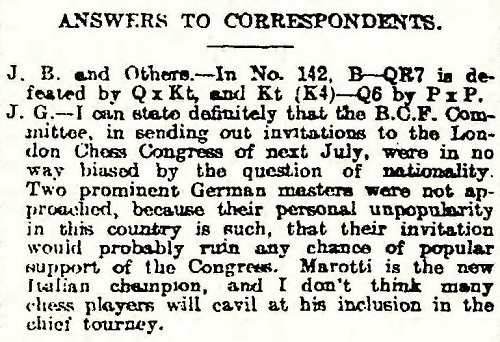 On page 8 of the 23 July 1922 edition of the Observer, in a column by Harley entitled ‘Capablanca and his rivals’, there was a rare reference to Lasker by name in connection with London, 1922:

‘In the Masters’ Tourney we have the world champion, Capablanca, most of the other great foreign experts (with Lasker a conspicuous exception) and six representatives of the British Empire.’

Further details are still sought concerning the basis on which invitations to London, 1922 were, or were not, extended, and especially with regard to Lasker and Tarrasch.